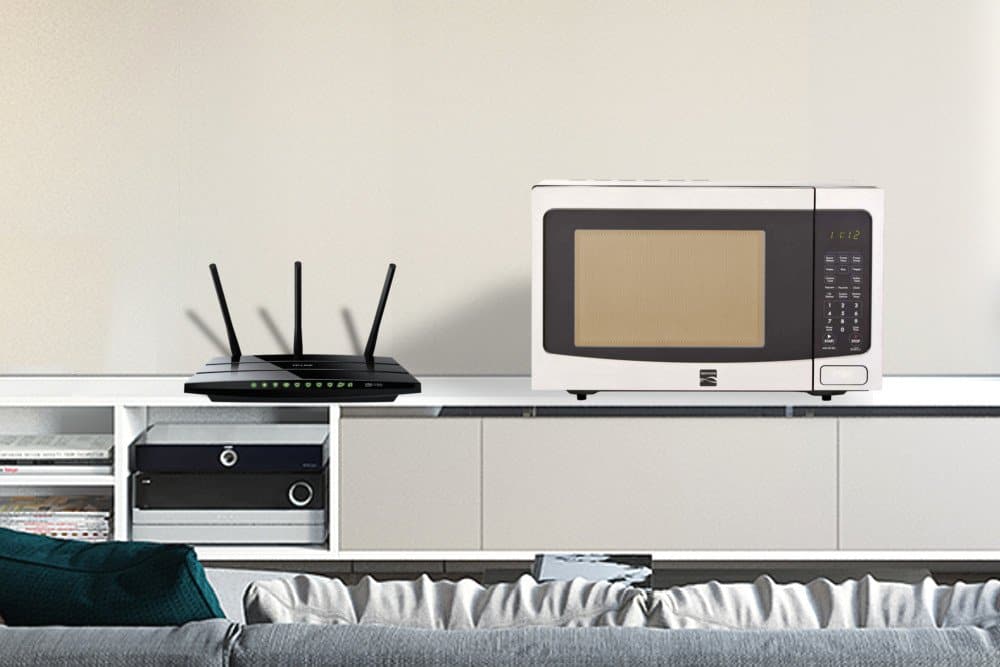 I would like to start off by clearing the air around the extremes to which these two can cause damages when mishandled. There are a lot of exaggerations from movies or stories told to misconceptions. I had seen in a movie where a Microwave oven exploded when a phone was put inside it… Shake my head. I am not saying nothing is going to happen, but explosion?

That’s ridiculous. The phone will certainly be damaged for sure because the Microwave releases electromagnetic radiation. When there isn’t water to absorb these radiations, they will induce current on the conductive parts of the cell phone. Microwaves can typically generate one thousand watts of power, which definitely the solid components of any cell phone can’t handle such voltage.

How does Microwave affect Wi-Fi?

The truth is Wi-Fi and Microwave ovens all use radio frequencies, and these radio frequencies can be similar in a lot of ways, but they have their differences too. Their similarities include operating on the same frequency of 2.4GHz and dues to these similarities when these radiations collide; there will be an electromagnetic interference or what is called RFI, which stands for Radio-Frequency Interference.

This does not just happen with Wi-Fi alone; the high power output from a microwave can have an effect on the frequency hopping spread spectrum (FHSS), which is the transmitting radio signal used by Bluetooth devices. While these interferences can be noticeable, they are by no means fatal or explosive.

In other to prevent this collision of radiations, a typical Microwave oven is designed to airtight door shut to prevent the escape of radiations. Although the Microwave can’t one hundred percent stop the leak of radiation, these leaks could still cause electromagnetic interference with the Wi-Fi.

How does Microwave work?

Microwave oven (simply referred to as Microwave) heats food so quickly by directing heat energy through radio frequency to the tiny particles or molecules inside the food, and this is done efficiently with the help of the constant rotating gear under the tray where the food is placed on.

For a very long time, I thought that microwaves simply gets a plate of chicken hot by chocking it up with a lot of hot air while spinning the whole thing around. I wasn’t so wrong though just that what I called hot air was actually radiations.

Years later, when I got to know that I was now even more confused, are you saying these microwaves are feeding us with radiations? I don’t know much about science and stuff like that, but I know enough to understand that radiations are not really something we could take a bunch of and add to meals to spice them up or something and I also know from them science movies that stuff can actually be harmful to our human systems, it could really hurt somebody.

So why do microwave ovens put these radio frequencies into our food does ‘he’ want to kill somebody? Ok, let’s straighten something here. I know the movies have designed our thoughts to the fact that everything about radiation means red alert danger, so for every time, we hear radiations or radio frequencies, the first thing that comes to our is either boom!

Or invisible laser beams destroying our immune system. While all these aren’t so wrong to a certain degree, you might also want to know that there some good in radiation too. For instance, by applying ionizing radiation to our food, it eliminates microorganisms present in the food, making it safer for consumption.

When this microorganism is eliminated, the life shelf of foods are extended that it to say when food is passing through radiations or is preserved through radiation, it can stay much longer than when it’s not. Microwaves reduce the risk of food-borne diseases that are caused by microorganisms.

On a closing note, it’s important we know that these radio frequencies used by both the Wi-Fi and microwave oven can only be extremely dangerous when exposed to a large amount of the radiation and nothing to panic about though because none these means either a Wi-Fi router or a ‘closed’ microwave oven (emphasis on closed) could generate that much amount at a single time.