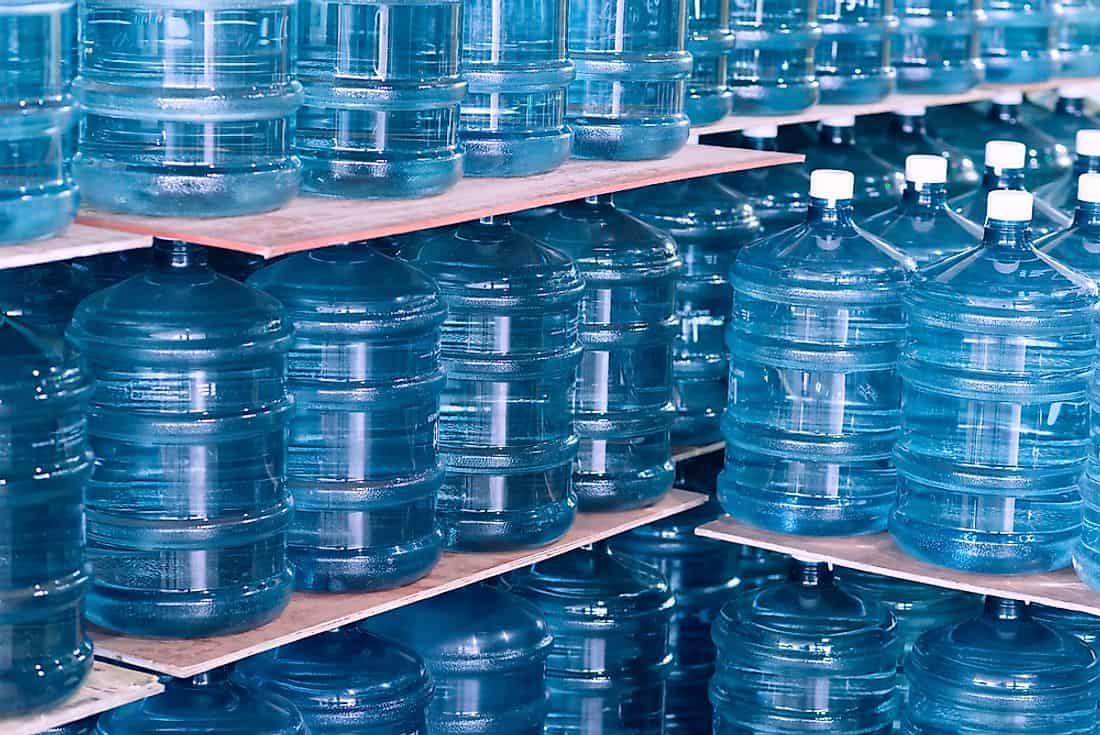 In discussing  ”how many bottles of water equal a gallon”, I’ll start by saying that  when popular Afrobeat crooner, Fela Anikulapo Kuti released the track “Water, e No Get Enemy”, he obviously was not mincing words. He even made it more graphic by saying “if water kill your child, na water you go use”.

Hahaha, as cruel as that sounds, it’s just the truth though. In fact, even when you consciously try to avoid it, water still does find its way to you. Remember that moment someone mistakenly spilled some on you? Oh! yeah, I’m water and you just can’t avoid me (water speaking).

That’s on a lighter note though. Water obviously does not have an enemy as our demand for it grows every single day and it is the most vital of all resources, from the need to consume it, to the vast quantities required for agriculture and industry.

In fact, I can still recall my biology class, our teacher made sure we understood that our human body consists of 50-60 percent of water. Then she will go ahead to stress how it helps to build the cells, aids metabolism, transports nutrients, flushes waste and all of that. Please, don’t let me take you down that biology lane. Not today.

Well, this is all in a bid to establish how essential water is to all aspects of life, but this article will be helping us know just how many bottles of water equal a gallon. As it’s our culture, let us first define some relevant terms before we delve into the business of the day.

What is a Bottle?

Table of Contents hide
1. What is a Bottle?
2. Types of Bottles
3. What is a Gallon?
4. Origin of Gallon
5. What is Water?
6. Use of Water
7. How many Bottles of Water Equal a Gallon
8. Liquid Ounces Per Gallon (Chart)
9. The US and UK Gallon
10. Differences Between US and UK Gallon
11. How to convert US Gallons to UK Gallons?
12. How to Convert UK Gallons to US Gallons?
13. FUN FACTS ABOUT GALLONS
14. Fun Facts About Water

Wikipedia says a bottle is a narrow-necked container made of an impermeable material (clay, glass, plastic, aluminium etc.) in various shapes and sizes to store and transport liquids (water, milk, beer, wine, ink, cooking oil, medicine, soft drinks, shampoo, and chemicals, etc.) and whose mouth at the bottling line can be sealed with an internal stopper, an external bottle cap, a closure, or a conductive “inner seal” using induction sealing.  Some of the earliest bottles appeared in China, Phoenicia, Crete, and Rome.

A wine bottle is a bottle, generally a glass bottle, that is used for holding wine.  It usually  measures 750 millilitres (26.40 imp fl oz; 25.36 US fl oz). Wine bottles are produced,  in a variety of volumes and shapes.

Plastic bottles are constructed from high-density or low density plastic. They are typically designed to store foods, beverages, chemicals, personal care products and more. You’ll find a wide variety of plastic bottle styles, colors and types of plastics. The possibilities are endless and their size ranges from very small bottles to large ones.

A Codd-neck bottle (more commonly known as a Codd Bottle or a Marble Bottle) was designed in 1872 by Hiram Codd, a British soft-drink maker and the bottle is solely used for carbonated drinks. It has a closing design based on a glass marble which is held against a rubber seal, which sits within a recess in the lip.

A hot-water bottle is a bottle filled with hot water and sealed with a stopper, used to provide warmth, typically while in bed, but also for the application of heat to a specific part of the body

people apply heat to the body as an effective way to relieve muscle pain and stiffness and one of the most effective ways to apply heat locally is with a hot water bottle. Increasing the temperature on a specific area of the body improves circulation and blood flow, which  works to relax and soothe damaged tissues.

Then, lastly but not least, we have the  water bottle which is a container that is used to hold water, liquids or other beverages for consumption. The  water bottle is essential because it allows an individual to drink and transport a beverage from one place to another.

A water bottle or bottlecan, is usually made of plastic, glass, or metal and they are available in different shapes, colors, and sizes.

What is a Gallon?

The gallon is a unit of measurement used for liquids such as gasoline, water, and milk in the United States.

It is a volume unit in Imperial and United States Customary systems. The symbol is “gal”.

A gallon is equivalent to 4 quarts of liquid or 3.785 liters and the United States is one of the last countries to use this term.

Though the gallon has roots in the British Imperial Units measurement system, the United Kingdom and most countries around the world have switched to the newer International System of Units.

The gallon can also  be defined as a unit of volume in imperial units and United States customary units. Three different versions are in current use:

The gallon originated as the base of systems for measuring wine and beer in England. The sizes of gallon used in these two systems were different from each other: the first was based on the wine gallon (equal in size to the US gallon), and the second one either the ale gallon or the larger imperial gallon.

Water is a substance composed of the chemical elements hydrogen and oxygen and existing in gaseous, liquid, and solid states. It is one of the most plentiful and essential of compounds. A tasteless and odourless liquid at room temperature, with  the important ability to dissolve many other substances.

It’s easy to forget that we also use water in ways we don’t see every day. Water is used to grow our food, manufacture our favorite goods, and keep our businesses running smoothly. We also use a significant amount of water to meet the nation’s energy needs.

Below is a summed up list of the diverse areas water is used;

How many Bottles of Water Equal a Gallon

In order to answer  the question “How many bottles of water equal a gallon”, we need to understand fluid units.

In physics and engineering, fluid units is the volumetric flow rate (also known as volume flow rate, rate of fluid flow, or volume velocity) is the volume of fluid which passes per unit time; usually it is represented by the symbol Q (sometimes V̇). The SI unit is cubic metres per second (m3/s).

In the United States, we measure four main units to measure the volume of liquid like milk or water and they are gallons, quarts, pints, and cups. Where cups is the smallest, followed by pints, quarts and then gallon.

To the question of how many bottles of water equal a gallon? The easiest and the simplest answer to this is:

A gallon of water by definition is 128 fluid ounces in the United States. Water bottles can vary in size, but the total number of bottles making up 128 ounces can fit in a gallon.

Don’t Miss: How many Ounce in a Liter

The US and UK Gallon

Here, we will better explain the differences between the US and the UK gallons, as that is a vital consideration when discussing how many bottles of water is contained in a gallon.

Differences Between US and UK Gallon

How to convert US Gallons to UK Gallons?

Still in the light of how many bottles of water in a gallon, another aspect we will love to consider is how you can convert US gallons to UK gallons as that could come in handy when you least expected. So here we go;

How to Convert UK Gallons to US Gallons?

At the end of the day, there really is no one size fit all answer to the question of how many bottles of water equal a gallon, as that clearly depends on which gallon you are referring to, which could be the US or the UK gallon.

Away from the main discourse, we have also brought you some fun facts about gallons and also about water as well. As much as they are fun facts, you could also learn from them.