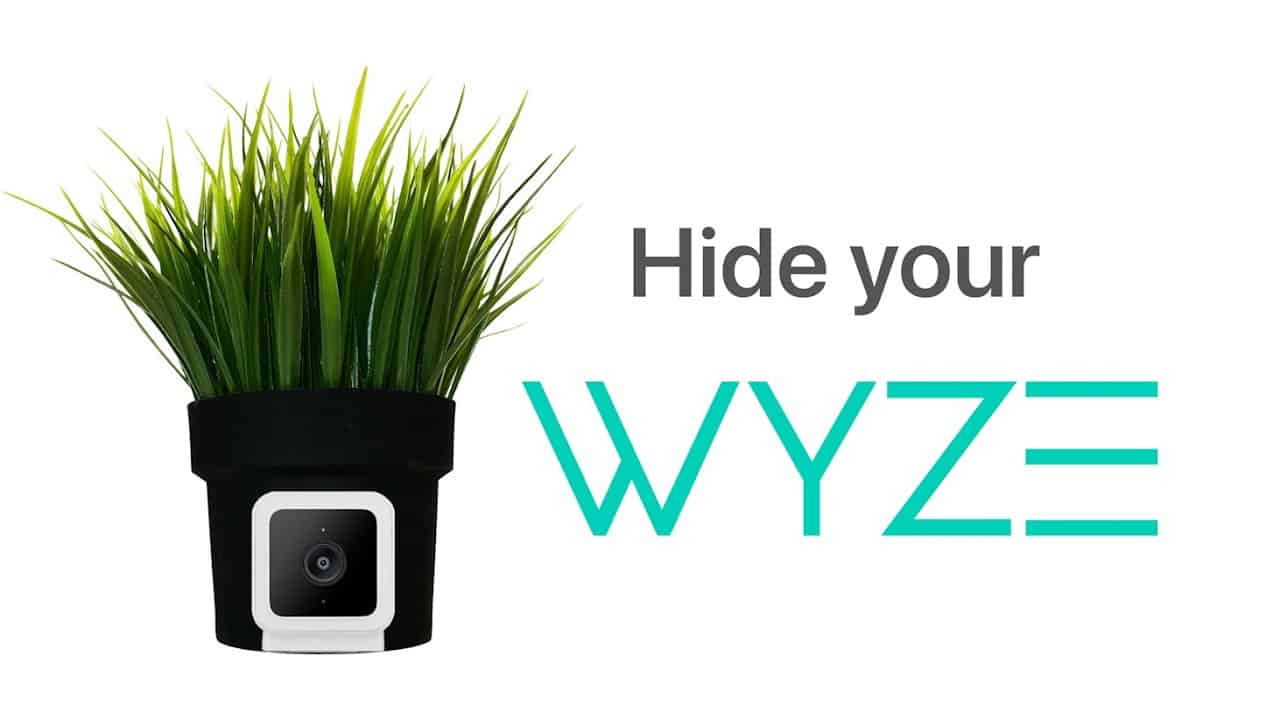 Having a security camera is now almost as important as having a simple doorbell, you can’t always figure out, what kind of security issues you are faced with if you don’t constantly have eyes on your surroundings.

Having eyes on your surrounding can be informed of having security cameras positioned at a different place to make it easier to see live footage of your property. This feature is synonymous with most security camera devices.

However, as a starter one of the best and most effective security cameras is the Wyze cam device. which comes for 29$, you can perform all the common features required of a security device on your Wyze camera device.

However, your Wyze cam device could be prone to theft or damages from burglars. since its acts as a disturbance to them, especially in areas with high crime rates.

Unless you hide it.

If you are stuck on creative ways how to hide Wyze camera, maybe you’ve thought of it but you felt the wires would be a huge challenge especially when hiding it outdoors.

You are lucky to be here since I will be delving into several creative ways How to hide Wyze camera devices both indoors and outdoors because your Wyze cam device is wired.

How to Hide Wyze camera

Having a Wyze security camera is big deal, however, one of the challenges you might face with burglars is theft and damages to your Wyze cam device, as soon as it becomes a bottleneck for them. They could decide to simply cut off its wires to kill the recording.

The wires on your Wyze camera device make things a bit shaky and could be a challenge to hide them.

But, amid the challenges, there are still creative ways to figure out how to hide Wyze camera device depending on where you want to hide it.

And, we will be touching the various places where you can hide them starting from how to hide them in your house.

How to Hide a camera in House

To hide a Wyze camera in your house, it’s best if you disguise it with something else so that it is hardly noticed. meaning you are hiding it in plain sight

Now, this tactic of hiding stuff works since it creates an opposite impression to what a burglar would perceive as dangerous.

Moving on, let’s break down the different ways I have discovered how to hide Wyze camera in your house.

This is an Out-of-the-box approach when it comes to hiding your Wyze cam device. The process isn’t hard to figure out.

If you have a teddy bear you can puncture the eyes and place your Wyze camera lens facing the punctured eye.

The benefit of using an everyday common object like a teddy bear is that a burglar will be less suspicious of him being recorded by a teddy bear. 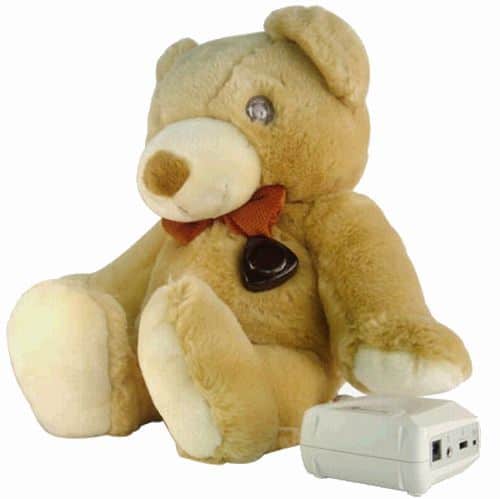 Moving on, another item on you can use to hide your Wyze camera indoors and on the plan, sight is a bookshelf 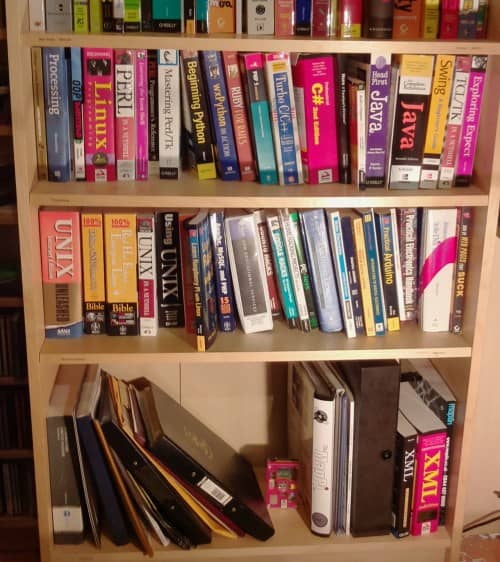 Now, to disguise your Wyze cam device on a bookshelf, you only have to use some books to cover it, while ensuring that the lens is open, 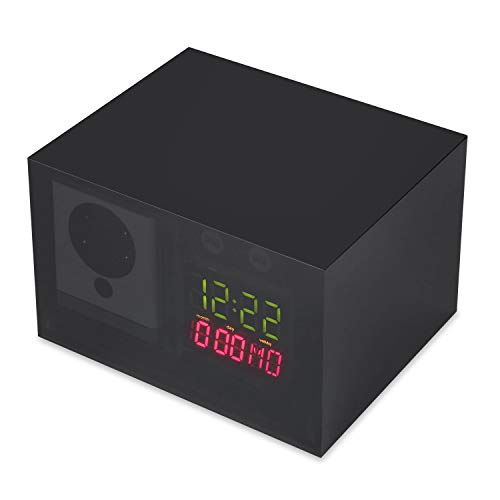 Looking at the picture above, you will see a hidden clock case, where you can easily insert your Wyze camera device into.

What this device does is: disguises the whole structure as a digital clock, whereas there is a security camera inside it recording the footage.

It’s a clever Invention that works brilliantly for disguising a Wyze camera device on sight.

Moving on, let’s delve into how to hide a security cam in a window

How to Hide a Security Camera in a Window

Apart from using a teddy bear, you can use a tissue box case by simply cutting a small hole exactly the size of your Wyze camera lane and then putting the device into it.

It is a pretty easy and basic way to hide your Wyze camera device however, you have to place the whole disguise close to a power outlet since Wyze cam doesn’t run on batteries.

Moving on, You should have figured out How to hide a camera in plain sight even while indoors. now I will be proceeding with some tricks you can use to hide the wires of your Wyze cam wires

How to Hide Wyze Camera Cord

To hide your Wyze camera, there are a series of tricks you can apply such as painting it, using a PVC to hide it, or even putting it inside a baseboard, all these work perfectly. You only have to consider where you are hiding your device by making sure it is close to a power source.

Moving on, let’s delve into how to hide Wyze camera devices outside.

How to Hide Wyze camera device Outside

To hide your Wyze camera outdoors there are a series of ways to go about that. But the only issue with hiding it outside is concealing it and doing it when almost no one is looking.

Note: while hiding your Wyze camera device, you might be faced with moving it a bit distant especially while outdoors in a scenario like that you can get a wifi extender, check here to learn how to set it up

Moving on, let’s break down the creative ways you can apply to hide your Wyze cam device outside. 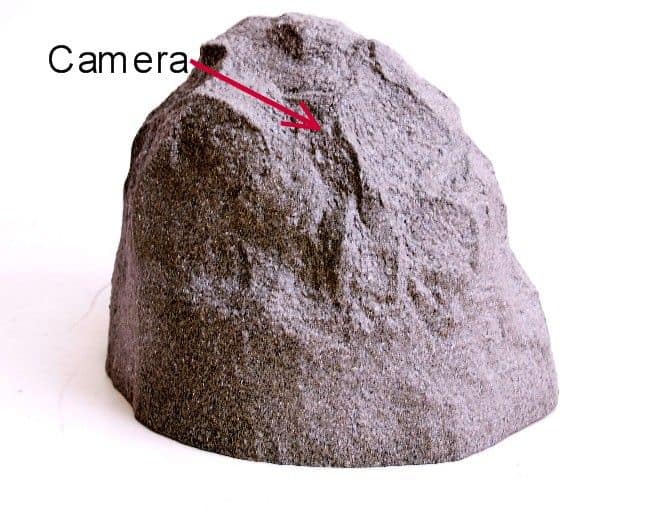 Fake rocks are hollowed-out rocks that can house your Wyze cam device. what you have to do to make use of this piece of object is to simply drill a part of the fake rock to the size of your Wyze cam lens and place the Wyze cam device inside while directing the lens to the open space you just drilled.

Another interesting option you can try is to install a fake camera. Doing this makes the fake one act as a decoy from the other working cameras. This makes a dumb burglar focus solely on stealing or destroying it without focusing on the others.

In addition to all that, Installing a fake camera alone can work on curbing crime around your surrounding. so it is a working solution.

3. Hide them in a birdhouse

You can get a carpenter to construct a birdhouse for you. and to do that it is simply advisable to construct it during the weekdays when most people are quite busy.

below is a picture of a birdhouse 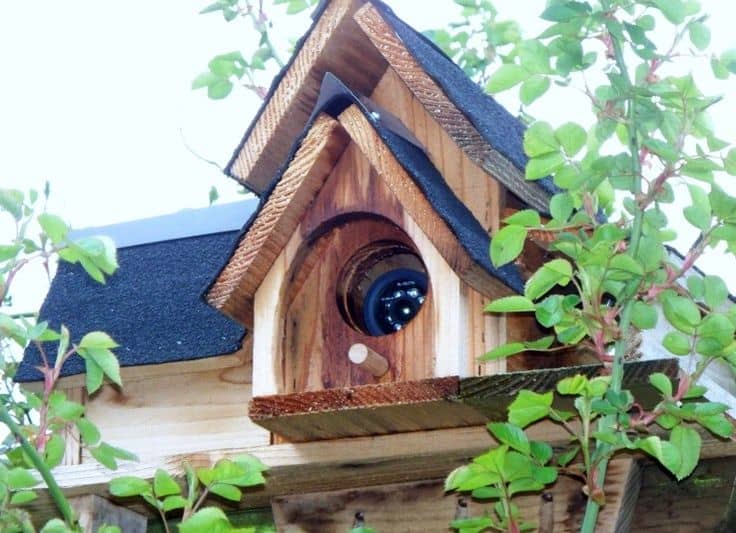 4. Using a Disguise Skin to Hide Your Camera

If you are hiding your Wyze camera on the tree shrubs, or any other place outside, adding a skin to it makes it blend in with the surface you are hiding it.

This alone makes it a bit harder for burglars to spot the device.

You can use a Speciality Gilles skin especially if you plan to hide it on a tree, shrubs, or plant’s surface.

Moving on, another DIY hidden camera idea on how to hide your Wyze camera device is to use a Flower/plant pot

5. Hide them inside a Flower Pot/Plant

Since your flower pot can be placed outside, you can drill a hole based on the size of your Wyze cam lens.

Also, you can place this structure right at the entrance of your house or at any entrance susceptible to buglers.

Why do I Need to Hide my Wyze Camera Device

Hiding your Wyze cam device comes with a lot of benefits, but the most obvious ones are to prevent theft or damages to your Wyze camera device, and also, it makes it much easier to see people for who they are since there isn’t any visible camera watching them.

Sometimes, you could have a babysitter behave wrongly with your kids if she/he feel no one is watching them.

However, exposing your Wyze camera has its perks since it wards off burglars, especially the Inexperienced ones or those without balls looking for a way to cause damages or steal something without anyone noticing.

How to Hide a Camera in a wall

If you want to hide items on a wall, you have to make sure you use items that will make your Wyze camera device blends easily with the wall, while making sure the camera lens is not easily noticeable. examples of options are wall clocks or a bulky picture frame or a hanging sunflower.

With all these steps listed above, by now, you should be better equipped with creative ways How to hide Wyze camera devices. But, one thing you have to take note of is that your Wyze cam indoors device has to be connected to a power source, unlike the outdoor camera.

in addition to that, you want to make sure that the security device is waterproof if you are hiding it outside.

Now over to you, which out of the creative ways as listed above have you tried and also if you have other creative ways you’ve been able to hide your Wyze cam device you can drop that also in the comment