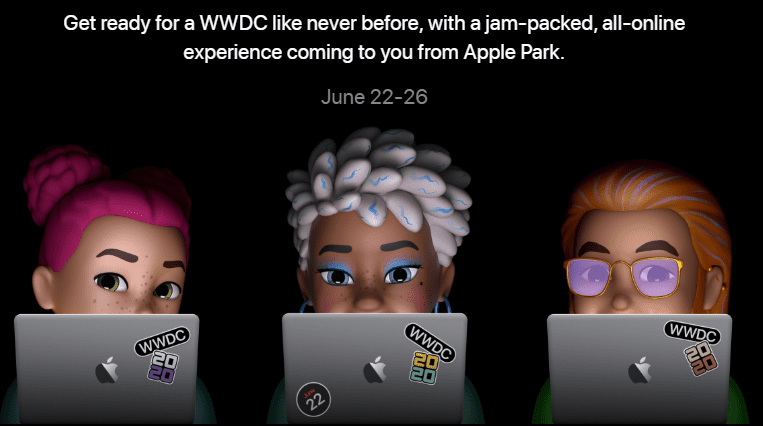 The COVID-19 pandemic brought the good news to all the attendees of the yearly WWDC, APPLE’S ANNUAL developer conference that usually cost $1,600 while it’s bad for the host. Life isn’t balanced and this deadly virus has proved it. However, while people usually go in massive attendance, this year’s annual conference will hold without a live audience in an attempt to curb the spread of the deadly Coronavirus disease. While the WWDS 2020 keynote is in the expectation that it will contain both new software and hardware that will analyze the company’s vision come to the end of the year and probably until the world is able to control Coronavirus. Therefore, since there is no live attendance, how then is it possible to watch Apple’s WWDC 2020 keynote from home?

The Apple Keynote commences on the 22nd – 26th, June at exactly 100 a.m PT which can be streamed directly from Apple’s homepage, or with the Apple Event apps on your Apple TV or using the Cupertino company’s developer site and app.

A few of what to discuss in the conference include the following.

We are all expecting Apple to announce the new iOS version, iOS 14 in the 2020 Apple annual conference. And a lot can be expected from the new iOS. However, the news got it that the new iOS 14 enhanced multi-tasking features, new layout on your Apple home screen, and the workout and augmented reality apps are redesigned for better users-experiences.

While we are waiting for the new iOS 14, we also gathered that Apple will likely announce the change of iOS to iPhone OS at this conference. So, let keep our fingers cross until the rumors manifest.

iPadOS13 for iPad was announced in the year 2019 Apple annual conference. And for the first time since Apple launched the iPad, the device would be running on an iOS that was developed for tablets instead of using the same iOS software designed for Apple iPhone. This decision is to bring the iPad close to other Apple products such as iPhone and macOS devices.

However, we cannot say the level of iPadOS14 and its feature. However, we can foretell from the release of the iOS14 that the iPadOS13 will not be left to crawl to meet up the required standard.

What to Watch out for

We all know Apple releases new OS at almost every year’s conference. And following the last WWDC’s annual conference, we can say that the ear 2020 Apple WWDC conference will bring information about the updates to WatchOS, tvOS, and probably a new MacOS iteration.

According to 9to5mac, Apple is planning to release a new design that is different from all the designs in the market before the end of the ear. While we may expect this to come in time, we can’t tell whether the new iMac design will be announced during the 2020 WWDC’s annual conference. The new iMac design is expected to be in 21.5 inches and 23 inches devices respectively where the slim bezels and other design features have featured in the iPad Pro.

Bloomberg has it that Apple is expected to switch to personal ARM-based processors for Mac computers. The new processors’ chip will be made available for the A14 processor (yet-unreleased) in the upcoming iPhones.

This is indeed a good development for Apple to move away completely from the old Intel processors which in return enables the company to have absolute control over iPhone hardware development which will serve as a boost to the power and speed of their laptops and desktops.

Literarily, we should expect more announcements at the conference which is more than what we have circulating which will be available later. However, additional hardware rumors include the over-the-ear-Airpods and a new AppleTV.