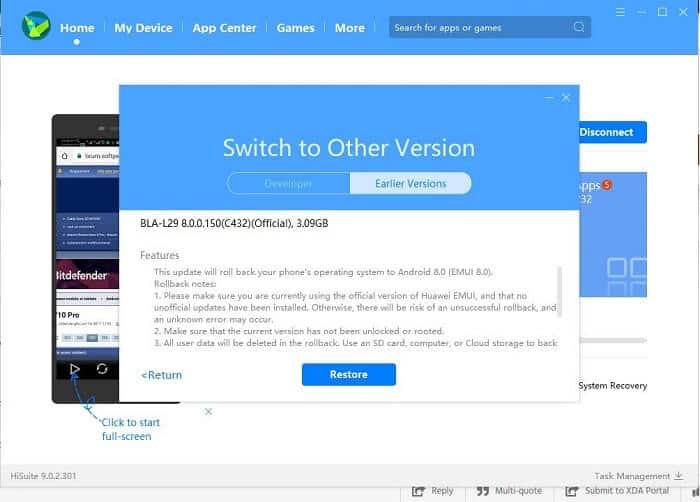 Huawei has restricted EMUI 9, Android Pie based smartphone from using a 3rd party launcher. This implies that you can only use the Huawei launcher as your default launcher. You can’t download launcher such as Nova launcher on your Huawei phone.

This is a two-way thing.  If you upgrade from EMUI 8 to EMUI 9 it’ll be very easy to downgrade from EMUI 9 to EMUI8. But, if your phone is preloaded with the Android Pie (EMUI 9) it may require an additional last to roll back to the previous Android Oreo.

So, if you can’t let go the Nova launcher and your Huawei phone running Android Pie (Android 9.0), here is how to downgrade the EMUI 9 to EMUI 8 to be able to install Nova launcher on Huawei preloaded with EMUI 9.

1. Download and install the HiSuite 9.0.2.301  on your PC. If you have HiSuite installed on your PC update the HiSuite to the latest version.

2. Connect the Huawei phone you want to downgrade from EMUI 9 to EMUI 8 to your computer using a USB cable.

3. Wait until your computer popup the HiSuite user interface. If this doesn’t happen, click on the HiSuite icon on your desktop to launch the app.

4. Now, click on the Update button in the HiSuite software that just opened on your PC.

5. When the update is available click on the switch to other versions tab

7. To roll back to EMUI 8 click on the restore button and follow the on-screen instruction to complete the rollback.

When you clicked on the restore button, either EMUI 8 or EMUI 8.1 will be restored on the connected phone. Do not disconnect your phone when this is ongoing as it might affect your installation and render your phone useless.

Note: With the Huawei EMUI 8 you can download Nova launcher on Huawei Honor, P20, P30, Y9 2019, and other Huawei smartphones with EMUI 9 downgraded to EMUI 8

If you cannot afford to roll back to EMUI 8 you cannot use a 3rd party on your Huawei honor and other Huawei phones with Android Pie. You have to stick to the Huawei default launcher.

Now, restart your Huawei phone and the Huawei default launcher should be working fine.

If this doesn’t fix it click on clear data and restart your phone. This should fix it but if there are customized settings on this launcher the clear data will wipe it off.

Huawei launcher is part of the Huawei home service. However, if an update is available you should always update it to avoid this itch with your launcher.

Updating the Huawei home service will fix the Huawei launcher not working on your smartphone.

If there is any update available make sure you upgrade to it. Since it is the Huawei home service, this will also update the Huawei default launcher