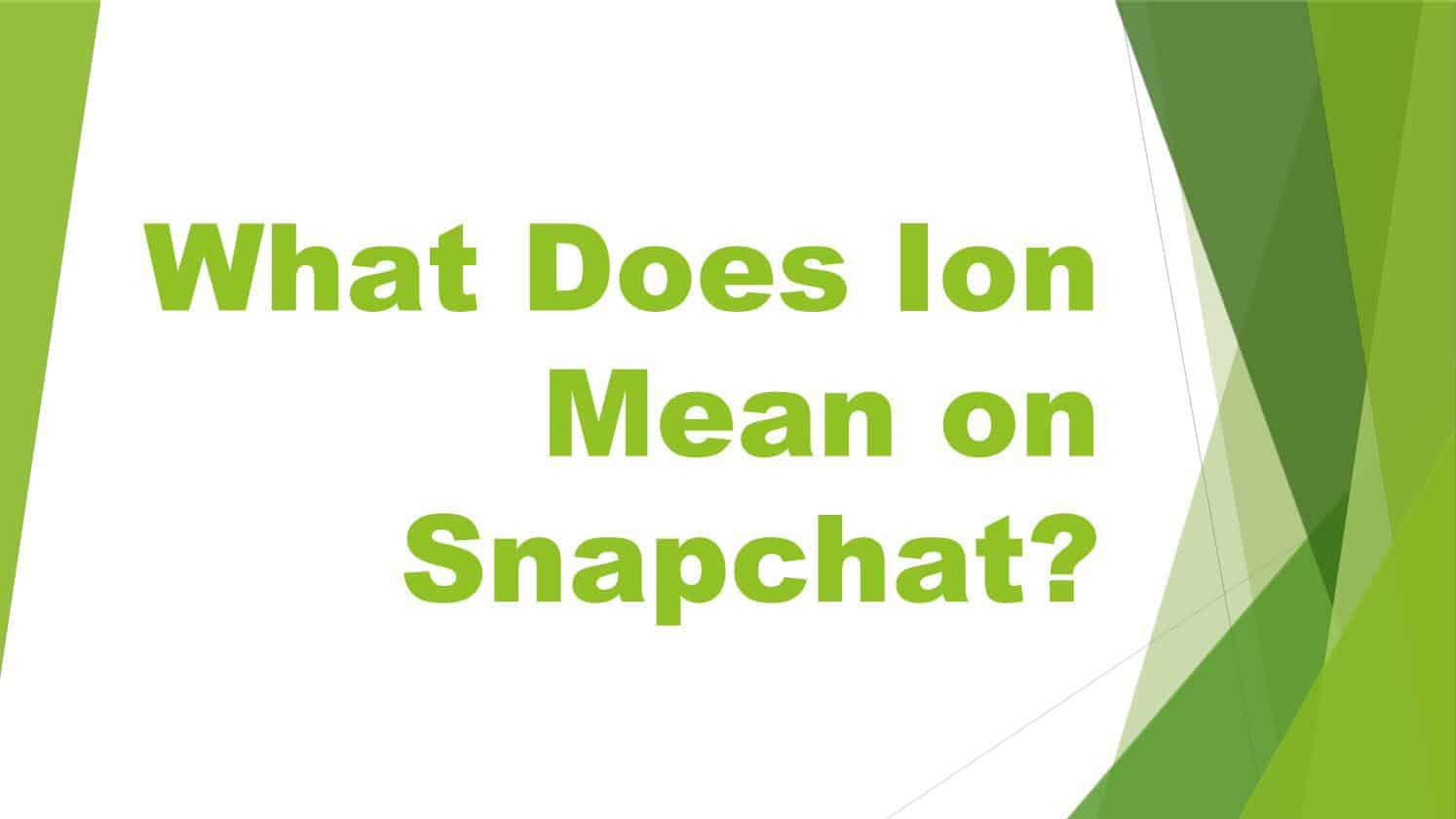 Social Media is just a world of its own, so much that it has certain words that are just peculiar to it, because they really isn’t how someone can use ”ion” in real life conversations, but it is a staple jargon on Social Media, and that is snapchat to be precise.  So, this article will be helping us know and understand “what does ion mean on Snapchat“, amongst other things. Read on to learn.

Snapchat is a popular messaging app that lets users exchange pictures and videos (called snaps) that are meant to disappear after they’re viewed. It is  advertised as a “new type of camera” because the essential function is to take a picture or video, add filters, lenses or other effects and share them with friends.

In fact, for any selfie you want to  take, you had better use Snapchat. The filters just really have a way of enhancing selfies, pictures and even videos much more better than the ordinary camera does. Especially if you an Apple user.

Snapchat was created by Evan Spiegel, Bobby Murphy, and Reggie Brown, former students at Stanford University in September 2011(The App has been 10years going strong) and has become known for representing a new, mobile-first direction for social media, and places significant emphasis on users interacting with virtual stickers and augmented reality objects.

According to Wikipidia, As of July of  2021, Snapchat had 293 million daily active users, a 23% growth over a year. On average more than four billion Snaps are sent each day. Snapchat is popular among the younger generations, particularly those below the age of 16, leading to many privacy concerns for parents.

I think it is even safe to say, that if you have teens, then you  definitely know about Snapchat because it seems to be every young persons favourite picture App and has become one of the most popular social media apps out there, because it gives people what they really want, which is a simple way to share everyday moments while simultaneously making them look awesome.

Over the years, Snapchat has evolved from originally focusing on person-to-person photo sharing to presently featuring users’ “Stories”which is  24 hours of chronological content.

Then also, came “Discover,” a feature that allows  brands show ad-supported short-form content  and also allow users to keep photos in the “my eyes only” which lets them keep their photos in a password-protected space. It has also reportedly incorporated limited use of end-to-end encryption, with plans to broaden its use in the future.

One of the principal features of Snapchat is that pictures and messages are usually only available for a short time before they become inaccessible to their recipients. Other features are;

A story is a collection of moments in the form of pictures and videos that, taken together, create a narrative.

Stories appear for 24 hours, and people can view them as often as they want during that period. Once the 24-hour time limit is up, Snapchat automatically deletes the story

Stories are seen  as circles, and when you tap them, they autoplay the pictures or videos the user collected.

We spoke about Discover earlier, so  extensively now,Snapchat Discover is a page on Snapchat that’s basically a news feed, just like what Explore page is to Instagram. On Discover, you’ll find content in the story format from news publishers, content from influencers, celebrities or brands.

One can subscribe to specific Discover sources to receive their feeds, as it even   offers some legitimate news from publishers, which they call publishing partners, including the New York Times and Vice Media, The Wall Street Journal, and ESPN.  Even though the offerings can be promotional.

Types of  Contents on Snapchat Discover

The following are some types of contents on Snaptchat discover.

You friend’s Snapchat Stories will be found at the very top of the Discover Screen. Here you can watch all of your friend’s Stories by simply tapping on the circle to view.

Friends’ Stories are in order of who you keep in touch with the most. That being said, the people you Snapchat most will be in the front of the feed so you can see what you want first! And just right below you’ll see that you can find your Friends.

Our Stories are collections of Snapchats that are submitted from different Snapchatters throughout the Snapchat community. These Stories are used to capture places, events, and other significant topics from different points-of-view and presents them as a Story for the rest of the community to watch.

So, if you can’t make it to an event, watching Our Story makes you feel like you’re right there!” Basically, users who are at the location of the event can use “Our Story” to add their videos, photos, and doodles to a publicly viewable content stream(I think it’s safe to say it is a live streaming feature, that doesn’t necessarily want to be called such)

For example, say you’re attending a live match, you can submit Snaps to Our Story. These moments will be compiled to create a Story centered around the event. That way, those you could not attend the game live, will not miss a beat!

These are Discover content that is from publishers and other media partners that partner with Snapchat. Some notable publishers on Discover include, but aren’t limited to:

Snapchat has proven to provide an opportunity for these companies to connect with their audience. And in order to keep their audiences engaged, most of these publishers on Snapchat Discover incorporate a mix of news, videos, and games into their channels.

As Snapchat is an all inclusive media, it also allows TV networks partner with them, to feature their channels on the Discover page. But rather than incorporating the mix of media that publishers do, these networks publish video segments. Some of Snapchat’s well-known TV network partners include:

When you sign up, Snapchat gives you your own unique QR code, that you can simply  take a snap of the other person’s code,  if you want to be their friends and they’re automatically added to your friends list.

These are location-specific elements that can only be unlocked by visiting a specific place. Businesses use geo-filters as a way for customers to check in and advertise them. A kid could create a special geo-filter for their sweet-16 party for attendees to add to their photos.

Like PayPal or Venmo, Snapcash lets users transfer money to each other.

Just like the name implies, if you don’t want your snaps to disappear, you can store them to send later.

This is exactly what it sounds like: a place to buy Snapchat-related items.

A feature that helps you identify a song. You can “Shazam” on Snapchat to quickly identify nearly any song playing within earshot, to use this feature, simply press and hold your finger on the main camera screen. Shazam will then identify the song playing near you, and give you the option to close Snapchat and open a music-playing app.

What does ion Mean on Snapchat?

I would like to start by saying you should not mistake this ”ion” to what you had or what you are having in your  Chemistry class, as they mean two very different things.

Ion in Chemistry, means an atom with a negative or positive charge due to the loss or gain of an electron.

Whereas, in the world of Snap and chats, ion equally means a number of things, the most commonly accepted meaning of it being “In Other News.”

So, “ion on Snapchat” means “In other news.” And the Snap ion is widely used across the world by the Snapchat platform users.

The acronym is mostly used in texting and chat messages to change the point of a conversation.

It is an acronym that has come to be used quite universally and it’s use extends beyond the confines of Snapchat, and can even be found in text messages and DMs.

Many emoji keyboards have stickers pertaining to ion. You can search for these stickers using the acronym or just ‘in other news’

How is ”ion” used on Snapchat

Ion can be used either seriously, or as a sarcastic way to tell someone that their chosen topic of conversation is boring and as it’s often the case with most slang, the exact connotation depends on the context.

So if you are whining about something that evidently does not interest the other person, they can just chip in ion in their response to you, which means “please pick something different to talk about.” That could hurt a bit though, but it is what it is.

Ion can also be used to start a conversation with someone whom you do not usually talk to. In this regard, ion is used to break the ice and introduce a topic immediately.

Used out of context, ion is a fun way to bring attention to a fact that you would like to share. For example, ‘ion, climate change is really affecting our plants and nothing is being done about it just yet.

What more,Snapchat even has a sticker for ‘in other news’, that you can add to your snaps.

When used in a snap or story, it is better to create a separate textbox for ion. This lets you highlight the topic rather than the ‘ion’ text. If you don’t feel like typing it out, you could always just use the sticker instead.

How to use ion on Snapchat

Here is a brief rundown of how to use the ‘ion sticker’ on a snap.

1. ICYDK: This stands for  ”In Case You Don’t Know”. It can also be used interchangeably with ‘ion’ and ‘FYI’ to signify a change of topic.

It can also be used when you’re about to catch someone up on information they likely haven’t heard yet, or to bring up a new topic in a conversation, or to  divulge personal information about yourself to a friend or loved one.

2. IMO: This stands for ”In My Opinion”. IMO is used to voice your own opinion about matters that you hold dear or when you simply want to offer your perspective or opinion.  Although, IMO is an acronym or abbreviation, it is also considered a slang word that isn’t widely used in professional writing.

3. FYI: This is shorthand of  ”For Your Information” is quite universally used to inform someone about something they probably do not know.

Unlike IMO, FYI is commonly used not only in informal communication but also in formal situations to call attention to certain information. A lot of people use the abbreviation in official mails.

4. JIC: This means ”Just In Case” and it’s commonly used to share a piece of information or convince someone of an action that might not be necessary.

JIC can also be used to do a favor for someone or share a piece of information that you’re not sure will be necessary. For example, you might send a friend a link to the newest episode of a series you both are keeping track on, accompanied by, “JIC you didn’t know it came out.” Whether or not the person knew, we are sure they will appreciate the  thoughtful gesture.