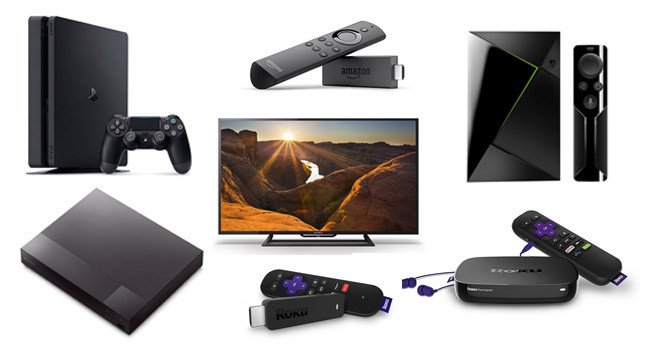 Best Streaming Devices – New age and technology have given us a bunch of things to munch on, one of such is what we feed our sight with. People no longer do everything offline of recent, we prefer going online to do the things we use to do online and even much more.

Games, communications & interaction, conference meetings, movie nights, soothing or loud music, and more have all found their way to the internet space.

There are several ways to watch online content through your mobile device, computer (desktop or laptop), Television set, or even your game console. You might have direct streaming support or not, or you might have a game console connected to it with built-in streaming services.

If neither of your Television set or game console has streaming support features or doesn’t include the exact media features you desire, you can get a dedicated media streaming center or hub.

Most media streamers permit you to set up your Television set with any local or online media streaming services for about a hundred dollars. A streaming device or media player, according to Wikipedia, is the delivery of Internet content in real-time, much as live Television broadcasts content over the airwaves via a television signal.

What To Look For In Choosing Streaming Device

Infinitesimal devices like Google’s Chromecast, Amazon’s FireStick, etc. can do most of what their bigger counterparts do. They only come short in speed since the big boys have enough room to pack in more processor speed, thereby making them faster than our tiny guys.

If you like to keep it simple, you can go with the tiny guys, but if you want to come out with a loud bang and enjoy the speed you’ve always loved, then you’ll have to call in any of the big guys like NVIDIA Shield TV, etc.

If you have a 4K television, you may need a streaming box that takes total advantage of those capabilities to avoid what I refer to as “Wasting graphics.” But in recent times, you will not find a modern device that doesn’t have the support of a minimum of 1080p resolution.

Before choosing your streaming device, here’s a little list:

The Amazon Firestick offers streaming options for your favorite TV shows, documentary, etc. Amazon’s FireStick or Fire TV Stick is one of the most rated streaming devices. The FireStick is usually connected to the HDMI port of your smart TV. It also stores all your favorite contents from TV shows to documentaries, to music, a plethora of games, endless photos, even your favorite movies. It is a portable device that makes it possible to carry around.

The FireStick is an android based device. It doesn’t support the Android Play store becomes it comes with its own store, the Amazon store.

The latest Amazon introduction of their streaming devices, the second-generation streaming TV cube launched the sometime last year 2019, comes packed with a 4K Ultra High Definition, coupled with a hands-free feature known as Alexa. It makes you feel like The Iron Man speaking to his robots because you get to control your TV with your voice, and since we don’t really like remotes, this eases the stress.

This device enters the market, offering us 4k Ultra HD with 4k Ultra HD for spotlight channels. It’s got great picture quality with portability features. You can stream seamlessly with its long-range wireless receiver. It’s also got HDR support with voice remote like the Amazon Fire Cube (2nd Gen).

This is also a streaming device that runs on Android OS. It streams contents through the use of downloaded apps and offers the much needed 4K Ultra HD. It can play games, as well as stream them from compatible sources.

I’ll be waiting to hear from you on the device you chose. Have a great time.