If these folders are creating confusion in relating with folders on your phone you will find this article relevant to your need.

If you don’t know what these folders mean you would go-ahead to remove them. Only to check back again and see the folders again.

However, in this post, I’ll explain in details what the Facebook katana folder stands for and what the folder do just as I explained in details everything you need to know about Facebook orca folder.

Meanwhile, the main issue most people have with both orca and katana folder is the inability to clear the, unfortunately, process com.facebook.orca has stopped. For a simple way to clear the Facebook messenger not responding here is an article I wrote on that.

Uninstalling any of these Facebook apps will remove the package name. This means that the associated package name is removed since the app is no longer available.

It’s the Kanata and Orca files that make the Facebook Messenger app run smoothly. Even when you force stop the Facebook app, the katana folder remains part of the folder in your device.

Do you have to Install com.facebook.katana APK?

However, if you do not install the Facebook app and you see the Katana folder then, it must have been installed by your phone manufacturer or carrier.

However, the com.facebook.katana, com.facebook.home, and com.facebook.orca are hidden folders in your device manager. It may corrupt your phone app is tampered with without understanding why there are created.

Take, for instance, the Pname com Facebook orca folder is a folder that is created when you install the Facebook Messenger app where deleted Facebook messages, pictures, chats, emojis, emoticons, and others are kept for easy access. This means that once deleted or not found on your device you will not be able to restore deleted messages on your FB messenger app.

Is com.facebook.katana a Malware or Virus?

According to an online definition of a virus, a virus is a piece of code which is capable of copying itself and typically has a detrimental effect, such as corrupting the system or destroying data.

However, since this katana folder is created by a known app then, we can say the katana Facebook folder is neither malware nor a virus.

We all know that the Facebook app code has some defect that could lead to draining phone battery faster. This is common among Samsung users. Samsung devices often pop up “com.facebook.katana drains the battery”. The error message happens often on Samsung S7 and some other latest version of the brand.

Should I Remove the pname.com.Facebook.Katana Folder?

Where to Find the com.facebook.katana Folder?

You can find this folder depending on where you install your Facebook app. However, in most cases the pname com.facebook.katana is always on internal storage. To search and find the katana Facebook folder follow the direction below. 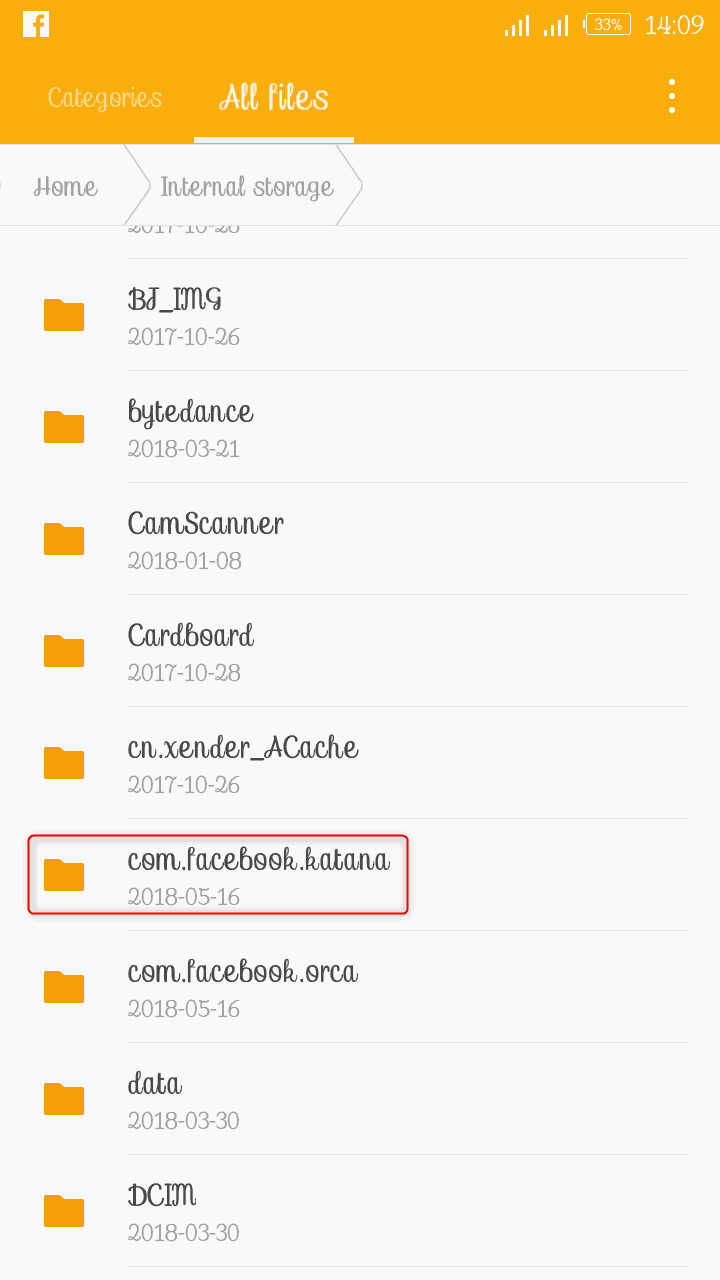 When you open the katana folder you will see fb_temp >> .nomedia. The .nomedia implies a hidden folder.

Note: If you hate to see the Facebook Katana folder you can hide it. But there is no way to delete it.

It’s ideal to find out what you don’t know and take the necessary measure to play smart against virus or malware. However, what it means to have the com.facebook.katana folder on your Android is that you want to keep using the Facebook app.