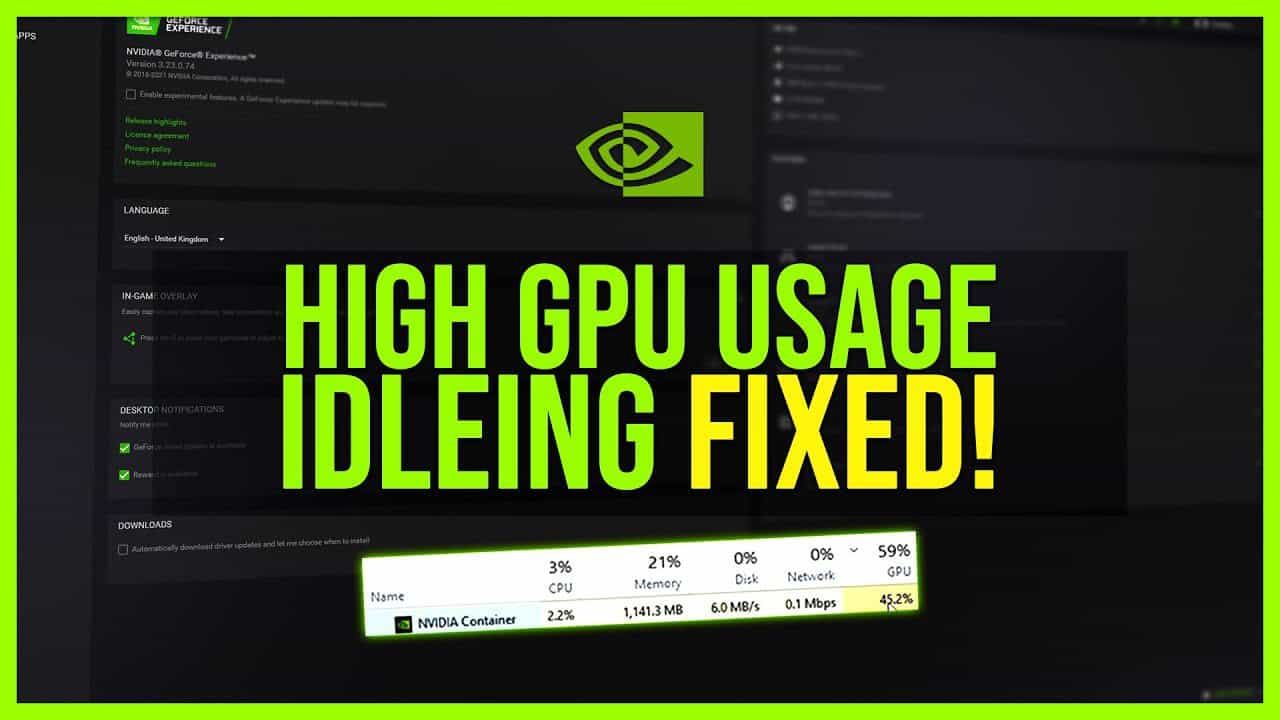 It can be frustrating when you have a computer or laptop overloaded with high GPU usage especially when it’s just idle. High GPU can slow down the entire system and affect its overall performance. But, what if there is a way to lower the GPU usage? By following the different methods outlined in this article, you will be able to lower GPU usage significantly.

The first thing to take note of when trying to lower GPU usage is to know the factors that can affect your GPU usage such as your OS, the games you play, your system configuration, and your graphics card.

Trying THESE different methods is important so you can know which works best for you.

In this article, you will learn how to lower GPU usage on your PC to prevent dominating too much of your resources. Read on! 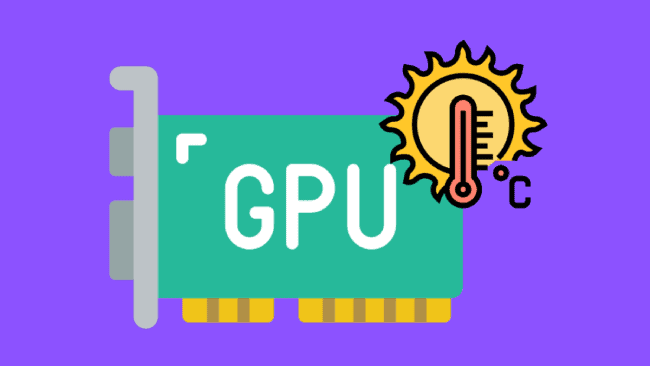 Table of Contents show
1. Why is my GPU at 100% usage even when Idle?
2. How Long can a GPU Run at 100?
3. What causes high GPU usage?
4. How Much GPU Usage is Normal?
5. How to lower GPU Usage
5.1. Clean Re-install Drivers and Software
5.2. Uninstall & Reinstall Nvidia and AMD Graphic Card Driver
5.3. Update or Reinstall GPU Drivers
5.3.1. For Nvidia
5.3.2. For AMD Drivers
5.4. Lower Your Game Resolution and Settings
5.5. Turn off all GPU Overlays and Auto Replay Features
5.6. Disable Applications With High GPU Usage
5.7. Configuration of Settings in GeForce Experience (for Nvidia GPUs)
6. Configuration of Settings in AMD Radeon Software (for AMD GPUs)
7. How to lower GPU Usage on Nvidia
8. How to Fix High GPU Usage on AMD

It is normal for GPU usage to get high during a game session. Even though your GPU is designed to be used 100%, there are a few reasons why high GPU usage becomes an issue when idle and you should try and fix it as soon as possible.

If you are a beginner, high GPU usage can overheat your graphics card which can force the fans to spin at complete speed. When your computer begins to sound like a jet engine, it is most likely because of this.

The card won’t be able to run games effectively because the resources are being used on needless background programs.

Once you discover that your frame rate in games is too low than usual, then you might be having the overlay bug. For instance, if a background application is using a whole 90% of your GPU, then only 10% of the power will be made available when you play games.

Avoid running a graphics card often at complete power as this can degrade its lifespan and consume a lot more energy than usual, which could lead to a higher energy bill than you are used to.

In perfect condition, the GPU usage should always be under 5% when idle and there are programs opened. Web browsers can activate GPU usage, especially once the hardware acceleration has been enabled, and you are watching HD videos at 1080P or even higher.

A GPU at 100% can run splendidly for 24/7 usage under minimized temperature and power specs which won’t likely destroy the GPU anytime soon and you could run it for at least 2 years with constant use in the same condition and without any issues. 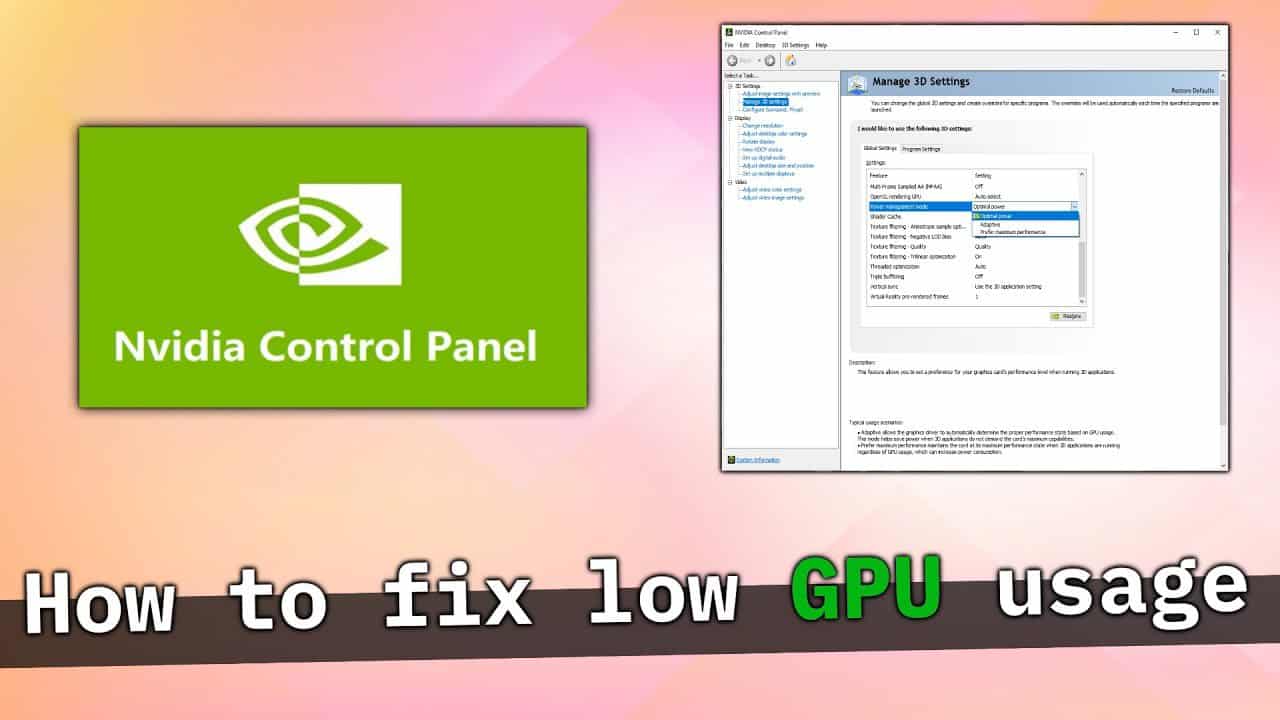 In case you are wondering what the cause of the high GPU usage is, check out the following reasons below:

These and many more are the causes of high GPU usage. It’s therefore important to fix this issue as fast as you identify it because it can adversely affect the overall performance of your graphics card and even reduce its lifespan.

How Much GPU Usage is Normal?

If you are a gamer, about 70% to 100% is expected for gaming depending on the type of game you are playing. Some games are not as graphics-intensive compared to others. In other words, a GPU usage of about 70% is acceptable. In contrast, most games can have your GPU usage getting as high as 90% and even up to 100%.

How to lower GPU Usage

Even though, disabling the GPU overlays and auto replay features will help lower GPU usage while idle in most cases. There should also be a great improvement in your frame rate when playing games. Do you have an Nvidia or an AMD Graphic Card Driver? Then, here’s how to lower GPU usage on both cards:

In case you feel that there’s an issue with the software itself, then you may need to uninstall either Geforce Experience or AMD Radeon Software from your programs. However, if this doesn’t lower GPU usage, you can proceed to the next fix. One of the first things to do is to uninstall and reinstall the graphics card driver to lower the high GPU usage. To achieve this, follow the steps below:

That’s it! This should help lower GPU usage.

At times, the GPU drivers may become outdated leading to high GPU usage which causes malfunction.

Updating your GPU drivers to the latest version will automatically detect any new driver updates and install them for you while reinstalling them will uninstall any old drivers and install the most recent version.

To lower GPU usage on your computer, you can uninstall and reinstall graphics drivers following the steps below:

AMD has its tool for driver file cleanup known as the AMD Cleanup Utility but you can also use DDU to remove the files.

That’s it! You have successfully uninstalled and reinstalled graphics drivers. Lower Your Game Resolution and Settings

In case none of the aforementioned steps has worked for you, then you can check your GPU usage during high-intensity gaming on high settings. It’s likely the issue is limited to only specific games.

Another possible way to lower GPU usage is by lowering the resolution and graphical settings in-game, especially if you are having issues with your graphics card.

The steps below will help you to change your graphical settings in-game in a simple way that doesn’t overburden your GPU.

However, you need to know that different games have different settings; some have more than one option for lowering graphics quality. You can engage each setting and see which provides the best performance while balancing your GPU usage.

It’s not appropriate to just leave the settings at high because it can harm your PC. Turn off all GPU Overlays and Auto Replay Features

another way to lower high GPU usage is to disable any GPU overlays and auto replay features.

On Nvidia, follow the steps below to disable these features:

If you are an AMD user, follow the steps below:

That’s all about how to disable GPU overlays and Auto replay features On Nvidia and AMD.

GPUs are basically for gaming and other multimedia applications, however, they are capable of draining your system’s overall performance once it’s used excessively.

You can single out which apps use a lot of GPU and uninstall or disable them as necessary with Windows’ built-in task manager.

Reduce your system resource utilization dramatically by turning off applications with high GPU usage. Follow the steps below:

This will temporarily close the app with a lot of GPU activity only. However, you can take a step further by uninstalling such graphics-intensive apps or limiting their usage. Configuration of Settings in GeForce Experience (for Nvidia GPUs)

Do you have an Nvidia GPU? Then, there are a few settings you can adjust that may be causing an increase in GPU usage even when the computer is idle.

You will need Nvidia GeForce Experience, which is a companion app with Nvidia GPUs that can be used to update drivers, adjust configurations, etc.

Now, this is how to lower the GPU usage if you have an Nvidia GeForce GPU.

Configuration of Settings in AMD Radeon Software (for AMD GPUs)

You can as well make some visible adjustments to the AMD Radeon software if you have AMD GPUs to lower GPU usage.

The AMD Radeon Software, which is an alternative to GeForce Experience allows you to control almost everything about your graphics card.

That’s it! One of the above fixes the problem of high GPU usage on AMD graphics cards and Nvidia.

How to lower GPU Usage on Nvidia

This is another way to fix high CPU usage on Nvidia. Follow the steps below:

This is a straightforward method how to lower GPU usage on Nvidia.

How to Fix High GPU Usage on AMD

This is another dynamic way how to lower GPU usage on AMD. Follow the steps below:

The settings will save automatically and the GPU usage should drop drastically to the normal range when idle.

However, note that, if some of the services mentioned above are not available, then possibly your card does not support them. If that is the case, you need to disable all the services listed for your card and this should help lower GPU usage.