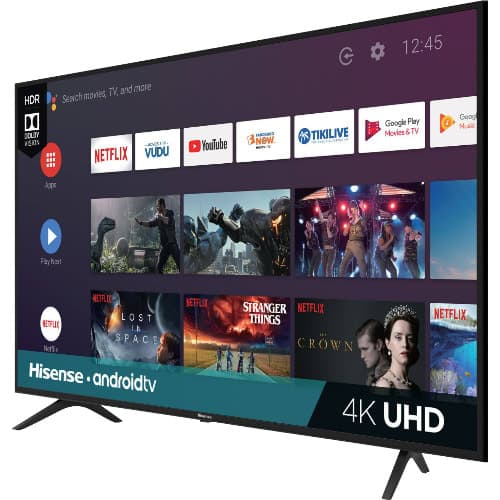 When your Hisense TV develop a problem, let’s say Hisense TV black screen problem, what would come to your mind is to return the TV or contact a technician to help you look into it which is a smart move. But, you can troubleshoot the Hisense problem to see if the problem (s) is under control.

These problems include the following.

Even though there are many other Hisense smart TV problems, these problems are widely searched for. So, we will concentrate on how to troubleshoot these Hisense TV problems.

How to Troubleshoot Hisense TV Won’t Turn on

Here is how to troubleshoot your Hisense TV if it won’t turn on. However, before we proceed with this troubleshooting, you want to ensure that the power cable is perfectly connected to the TV as well as the wall socket or suction box.

If after the above step and the TV won’ turn on, then follow the suggestions below.

Check to confirm that the TV is Turned On

The Hisense TV could be working fine BUT if the TV cable is not connected to the suction box or wall socket it won’t turn on no matter how hard you try.

Sometimes, when you turn on your Hisense TV and the power cable shakes from the wall socket it can turn off indistinctly. To confirm this, follow the steps below.

Try to Power Cycle the TV

Even though this approach works for a variety of assignments on your smart TV, let us try to power cycle the Hisense TV to see whether it will fix the Hisense TV won’t turn on problem.

Flickering is a common Hisense problem. The moment you start to notice a visible change in your Hisense TV brightness between the TV cycle display in the video settings then there is a problem with your Hisense.

Meanwhile, you may not quickly notice this the TV attached components are at fault.

However, when your Hisense TV is flickering, the following Hisense TV problems troubleshooting can help you out.

Now, this should solve this problem. Otherwise, consider the approach below in troubleshooting your Hisense.

While in the picture mode, play around with the settings to get the best of your Hisense TV mode. However, you need to take this one after the other to find out which of the options is causing the TV flickering problem.

With Hisense TV black screen you won’t be able to see any picture. Although, you might be hearing the TV sound the picture will be blank.

And this could be a result of the TV T-Con board. Although, fixing this problem on your Hisense TV requires an expert. But, here is a quick overview of how to fix the Hisense TV black screen problem.

So, here is how to fix the Hisense TV death screen which is often referred to as the TV black screen.

Note: If the TV power light blinks it could be a problem with the TV software. So, if you have your way into the TV consider updating the software.

This is another underrated troubleshooting to fix the Hisense TV problem black screen related.

Meanwhile, for perfect brightness settings on your Hisense, we recommend the following.

Although the Hisense TV brightness above doesn’t default. So, feel free to tweak the brightness settings until you are satisfied with the display. And in the long run, if there is a parament you don’t understand, the parameter should be set to the minimum level.

Also, regarding the RGB colour settings, don’t alter them. Leave them to default.

But, if you are not too good with the brightness you should consider a factory setting to resolve everything on your TV to its original state.

Your TV red light or power light shouldn’t be blinking non-stop. If you are experiencing this, then, this is probably a problem with your TV hardware.

When this happens, you only need to reboot your TV and you are good. But, if the error isn’t cleared, you may need the service of a technician.

Therefore, check these suggestions on how you can fix your Hisense TV red light blinking problem.

Turn off and on the TV

You want to quickly turn off the TV and turn it on after some minutes.

If the red light stopped blinking then you are done. Otherwise, check out the other recommendations below.

If the TV vent is blocked it can cause overheating on the TV. So, if the red light keeps blinking on your Hisense TV because the vent is blocked in one way or the other, then, you want to clear the vent to create enough room for ventilation around the TV.

When the Hisense TV red light keeps blinking it means that there is an error software or hardware problem. So, it is advisable to check out whether there is a firmware update available. So, you would want to update the firmware to the latest version.

Follow the procedures below to update your Hisense smart TV firmware to fix the Hisense TV problem.

During the update, the TV might restart several, don’t tamper with it to avoid more problems. Once the firmware update is completed, the TV will pop up a notification that the update has been completed.

You can do a lot to fix this Hisense TV problem. When your TV is turned on, no dead screen/black screen, no red light blinking, but no sound. Here are what you should consider.

Hisense TV no sound is one of the few technical problems of Hisense. However, if the problem isn’t hardware-related, the suggestions above are the best way to handle the problem.

Hisense TV Turn off itself after Turning on.

Overheating can cause your Hisense TV to turn off by itself when you turn on the TV. It could also be the TV power problem. At this juncture, you may need to replace the Hisense TV capacitor if it has to do with the power.

However, a good way to start fixing the Hisense TV turn off by itself after turn on is to create enough ventilation for your TV. Ensure that the TV is not generating excess heat that can cause the TV to drop dead when it’s turned on.

The steps to fix Hisense TV problems depends on the nature of the problem, so what works for you might not work for me. Therefore, for a quick approach to fix the problem you think your Hisense TV is facing is to first discover the problem and follow the steps provided in this article to fix it.