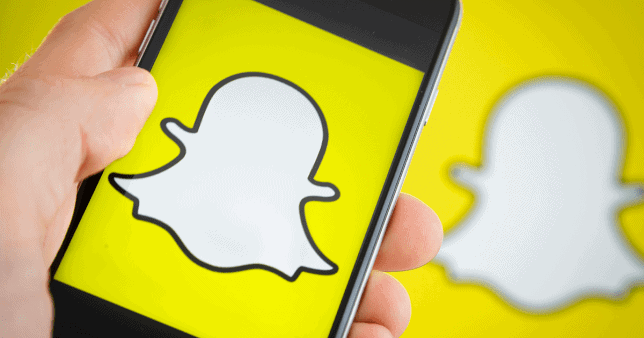 Do you want to get rid of Snapchat Update notification and default automatic update disturbance; we have provided the information you need!

Are you having trouble with the new Snapchat update, and want to get rid of future update notification? You may want to get a missing feature or something else back, but there are many reasons why you might want to remove the new Snapchat app update and revert to the previous version. Let’s see how. We also have provided a piece of information about a backup system that allows you to protect your Snapchat app against continuous future updates as well.

If you haven’t experienced Snapchat’s horrific update, consider yourself lucky. The unwanted update annoyed many app users and threatened many people to remove the app from their phone. Fortunately, you can get your old Snapchat back and avoid the confusing and irritating update.

Just follow the steps below, and you will be back to your old Snapchat methods in no time.

Snapchat has never heard of the “if it ain’t broke, don’t fix it” philosophy, which has resulted in an incessant Snapchat update that has users frenzied. Stories and friends have been put together on one page, with celebrity stories and posts in a completely different area.

There was a great response to the update, which made the once easy-to-use app confusing and frustrating.

However, before getting rid of Snapchat forever, here are steps to go back to your old trusted version of Snapchat.

Why you may want to stop/get rid of the Snapchat update?

Table of Contents show
1. Why you may want to stop/get rid of the Snapchat update?
2. How to Get Rid of a Snapchat Update
3. Backup your Content
3.1. Uninstall the App
3.2. Disable Automatic App Update for Snapchat App
3.3. Install an Older Version of the application.
3.4. How to Get Rid of Update and Proof your Snapchat app
3.5. How to Back up the app Version Automatically.
3.6. How to Define the Number of Versions to be saved
3.7. How to get the older version of Snapchat App back after a new update
3.8. Conclusion

While Snapchat is constantly trying to improve its app, sometimes its updates are more of an issue than they’d like. Snapchat updates are known to reveal private locations, cause snap map crashes, and similar matters.

Also, some users may not like the experimental feature released by the app. In this case, you can revert your application to an earlier version. It is always important to know which version of the app you are using and which version you want to return to.

How to Get Rid of a Snapchat Update

To remove the latest Snapchat update you may have installed, you’ll need to replace your app with an older version. Follow this guide below to install an older version of Snapchat on your device.

Before proceeding with this process, you should make a backup copy of the snapshots saved in your account. Saved snapshots are automatically backed up on a wireless network. You can check if there are any backups in your memories.

Launch the Snapchat app and swipe up from the camera screen. You can identify snapshots that have not yet been saved using the save icon in the upper right corner. 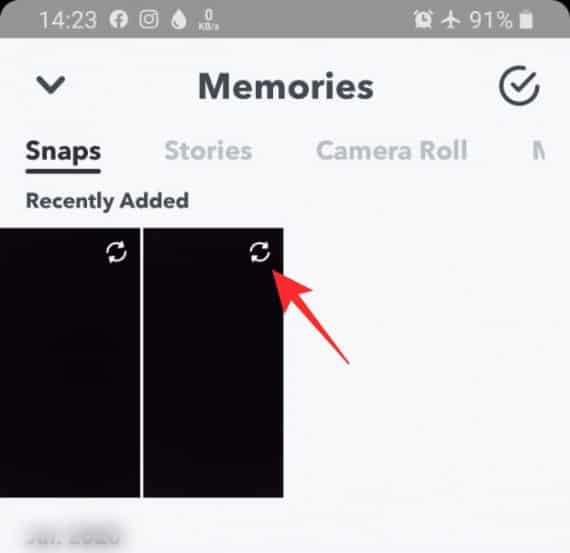 To complete the backup process, simply connect to a wireless network and wait for all of the snaps to be backed up. Don’t worry; you won’t lose any content you’ve already posted to your account.

Then you need to uninstall the Snapchat app on your device. This is the only way to go back to an earlier version. 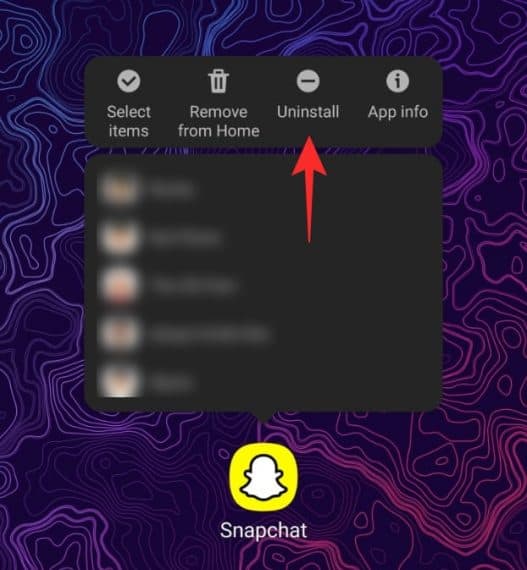 Don’t worry; you won’t lose any of your data or settings.

To prevent the Snapchat app from being updated, you should avoid automatic updates. The Google Play Store offers you the option to deactivate the automatic update of Snapchat in selected apps. 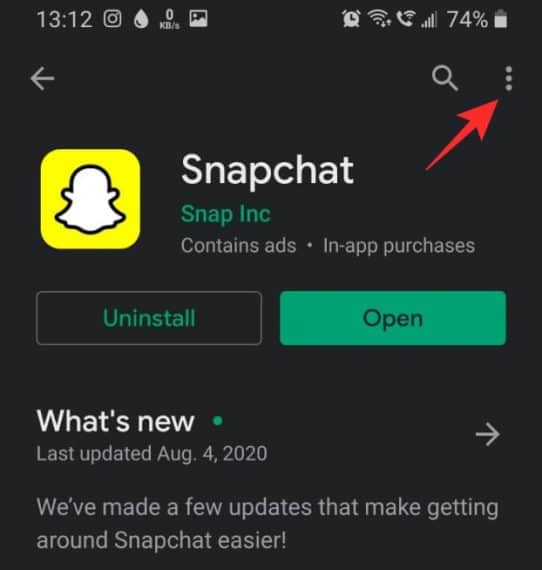 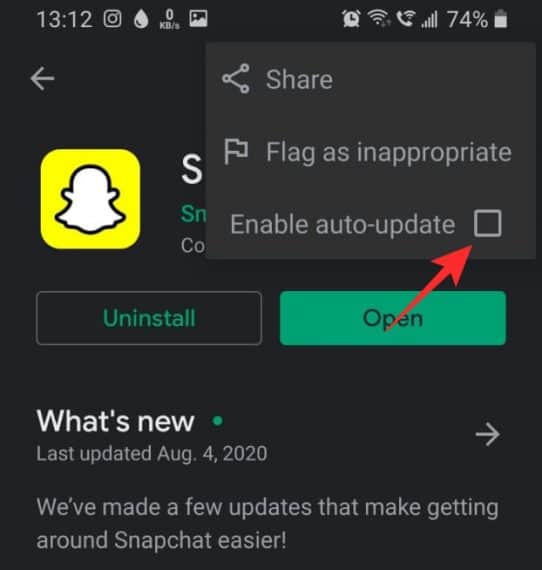 Install an Older Version of the application.

Now it is time to get the old version of the app you want to run. For this, you need the APK (Android App Package) for this version of Snapchat. However, you need to be careful when installing an APK. Getting an APK from a trusted site like APKMirror or APKPure is always a good idea.

Select an APK from a list on the Snapchat app. If you know the exact version you want to use, great. Otherwise, select one of the previous weeks. You can use the APK at the link to get the app version 10.86.5.61.

The APK needs to be downloaded and run on your device. You will be required to authorize the installation of third-party applications. Accept it to continue installing the previous version of Snapchat.

How to Get Rid of Update and Proof your Snapchat app

Here’s how to backup your current Snapchat app. If you don’t like the new update, you can easily use the backup again without having to download anything from the Internet.

If you’re concerned about future updates affecting your Snapchat experience, you can use a third-party APK backup app from the Play Store that will automatically back up the Snapchat app before the update. You can even choose how many versions you want to keep.

Even if you update your app to a newer version, you will still have a backup of the old version. So if you want to roll back, you can simply uninstall the latest update and then install the saved version. Backups. – So you don’t have to download an APK from the Internet.

How to Back up the app Version Automatically.

We’ll be using an app called Application Backup and Restore to back up the Snapchat app. Use the link here to download the app to your device.

Start the “Application Backup and Restore” application on your device. Now find the Snapchat app, activate it using the checkbox, and tap “Save” at the bottom of the screen. 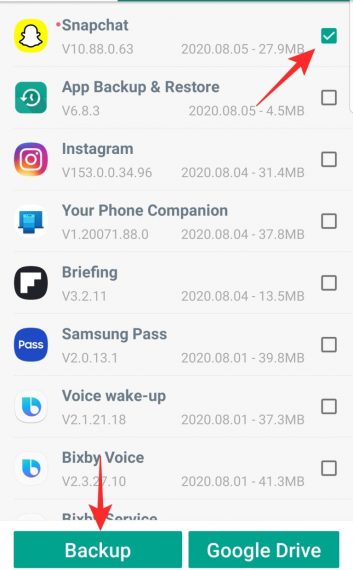 How to Define the Number of Versions to be saved

To adjust the number of versions you want the app to keep. 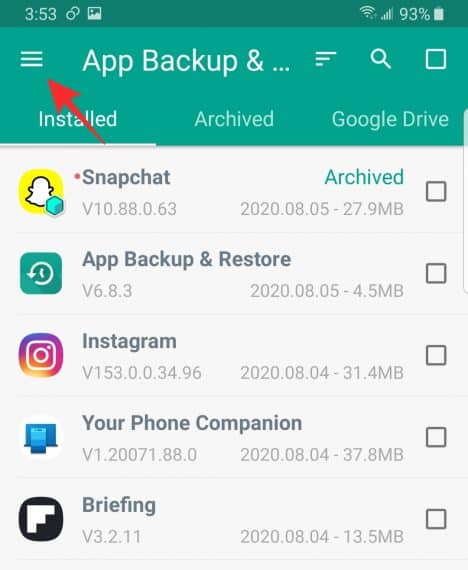 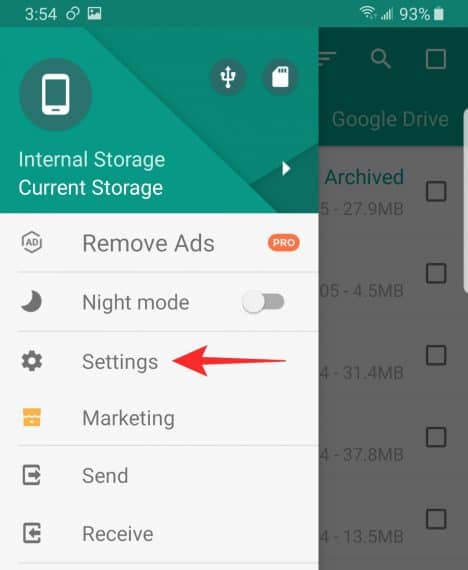 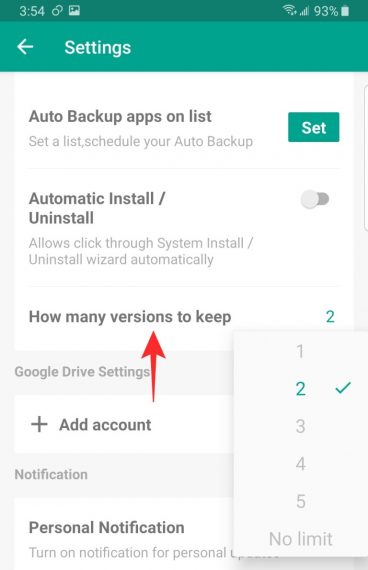 To restore an earlier version of the application, go to the Archived tab and select the version you want to restore.

Note: Make sure you back up your content before restoring a previous version of the app. Uninstall the current version first before reinstalling an earlier version.

To get the latest bug and security fixes, you need to update your app to the newest version. If you’ve used an APK, just visit the Google Play Store and update the app.

If you used a backup app, simply delete the old versions of the app or install a new version from the Google Play Store.