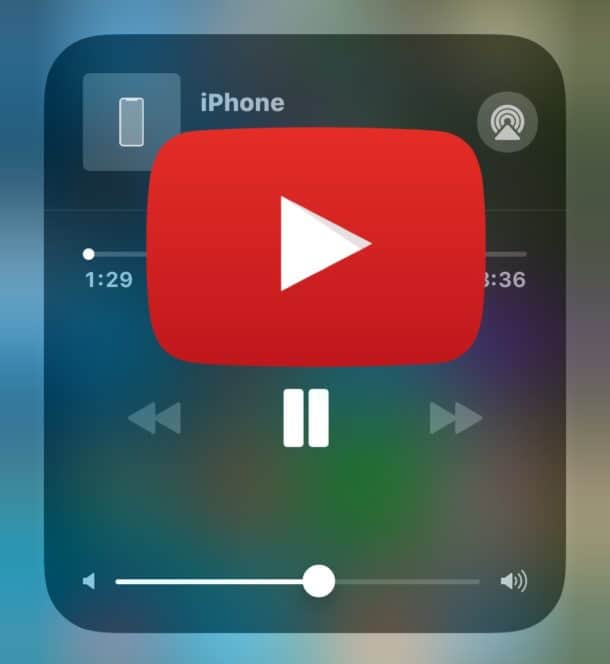 Actually, playing a YouTube video in the background is as simple as finding a video to play, then tap the play button. And once the video starts playing, you should simply return to your home screen, and find some other things to do.

But to carry out these steps successfully, there are some tricks involved. But a lot of people don’t know these tricks. And this is why we decided to write this article. In other words, this article would be discussing how to play YouTube videos in the background.

How to Play YouTube in The Background on iPhone

Here is a step by step approach to playing YouTube videos on your iPhone background.

To play a YouTube video in the background, the first thing expected of you, is to locate the Safari browser on your iPhone. This web browser is an app developed by Apple. In other words, it comes with all iPhones, regardless of what version you’re using.

Once you’re able to locate this app, you should tap it, to open up the app. The app isn’t so heavy, so it’s going to take only a few seconds to start up. Once the app starts up, you can then move on to the next step.

After you must have opened up the Safari web browser on your phone, the next thing expected from you, is to log on to YouTube’s web interface. By YouTube’s web interface, we are referring to YouTube.com. You should wait until the page has been fully loaded, before moving on the next step. Depending on how fast your internet connection is, the loading should take just a few seconds.

Once YouTube’s web interface has been fully loaded, you are not expected to interact with it. Although, interacting with it wouldn’t affect anything.

When you’re ready to carry out the next step, the next thing expected of you, is to tap the Sharing button. If you’ve been using iPhones for a while or know a bit about them, you should know what icon is used to represent Sharing. But for people who don’t know the sharing icon, below is a picture of what is meant by the Sharing icon: 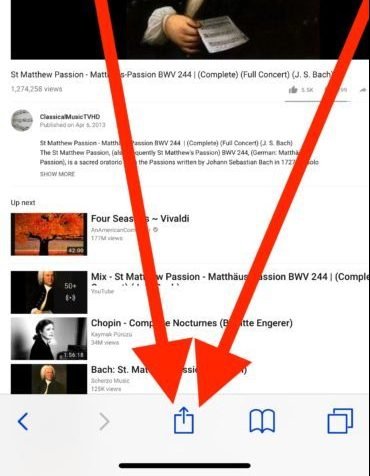 Once you tap this Sharing icon, a small interface would be loaded. This interface would contain a bunch of things, but what concerns you, is the Desktop icon displayed in the interface.

This desktop version should take only a few seconds to load. And only when it’s done loading, should you proceed to the next step

Step 4: Find a Video to Play

However, there are times when Google would display adverts, before playing the video you’re interested in. Under this kind of situation, you’d be expected to wait for the advert to be completed.

So as regards this trick, when you want to return to your home screen, you first have to open another tab. And to open a new tab, you just have to tap the browser’s overlapping squares icon. For those having difficulty understanding what this icon looks like, here’s a picture: 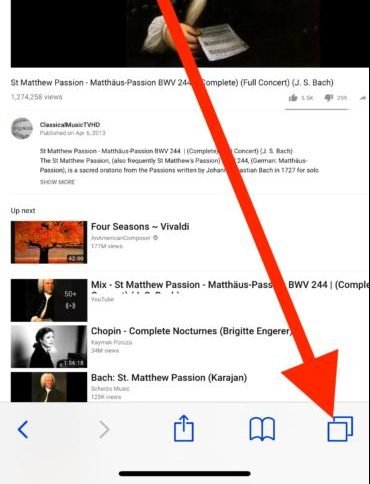 Once you tap this overlapping squares icon, an interface displaying your open tabs, would be loaded. But what you’re concerned about, is the plus button located towards the bottom of the interface. If you click this button, a new tab would be opened. And once you’re able to achieve this, the next thing is to simply return to your home screen.

Step 5: Return to your Home Screen

By now, the YouTube video must have been playing, while you must also be currently viewing a new and blank tab. So to proceed, all you have to do is to return to your home screen.

However, the method of returning to the home screen is not the same for all iPhones. But this shouldn’t be a problem since most iPhone users would know how to return to their home screen.

In short, at this point, all you have to do right now is to return to your home screen. And once your home screen has been loaded, you can decide on what it is you’d like to do next, while the video would still be playing in the background.