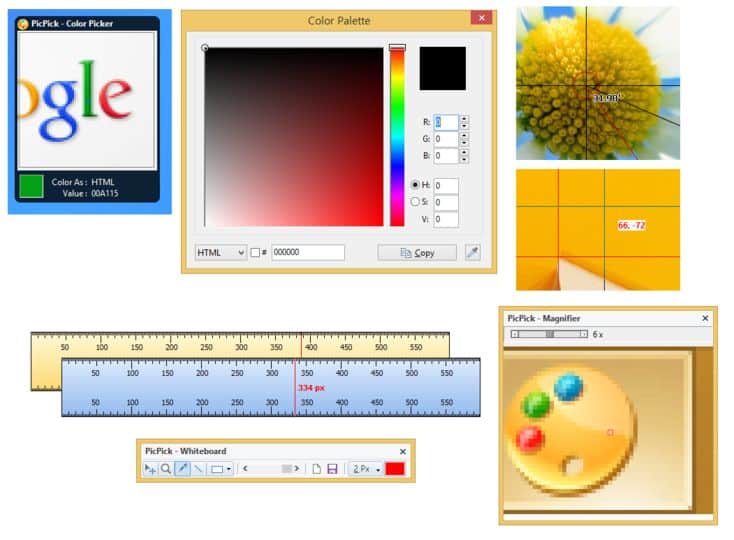 Taking screenshot is very common this day. We take screenshots with smartphones pressing power button + volume up or volume down together or swipe down three fingers on the phone screen to take a screenshot in the like of Infinix Note 3.

But, how do you take a screenshot on PC running Windows, Print Mac screen, Linux, and Ubuntu OS using a software? It’s very common to use the print screen feature on Windows and Mac and edit it using paint software or photoshop software.

However, if you don’t want to use an expensive tool such as the popular Adobe Photoshop, here in this guide, we’ll recommend some free tools to take screenshots, edit it, crop it, and save it to your PC or upload it online for easy access on other PCs.

Screenshot Tools for Windows and Mac

Lightshot is what I have been using for a while now to take screenshots on my PC when I don’t want to use the built-in tool like print screen and paint.

Light shot screen recorder, screen grabber has a simple interface and user-friendly interface with a feature to crop and edit images before uploading or sharing it on any platform.

LightShot shows support for browsers such as Chrome, Opera, and Mozilla with the use of an extension. We’ve even published a review on how to use LightShot tool for Windows and Mac.

Another productive tool to take screenshots is “Greenshot”. It is an open source tool and it works with different kinds of PC OS. It works with Macintosh computer, Microsoft Windows like Windows 7, 8, 9, 10, and Windows 10.1.

If you are looking for a smart way to take a screenshot on your Windows and Mac computer and be able to add some effect to it without importing it into the PhotoShop tool consider the Greenshot. It works like magic if you know how to use it.

You don’t need a special skill to use the Greenshot screenshot app, all you have to do is going through the users guide on the webpage just like using the LightShot as this will help you not to shoot yourself in the leg and get the best of the screenshot tool for Windows and MacOS computers.

SnagIt is different from the above tools to take a screenshot on Windows and Mac computers. Both Greenshot and Lightshot are free tools to take screenshots on PC and still get a user manual on how to best use the tools for a quality result.

Jing PC screen capturing tool was launched as far back as 2007 to join the league and compete with screen capture tools for Windows and Mac.

With the Jing offering supports for old and new computer OS such as Windows XP and Mac older version, it offers a simple user-experience to simply capture and share PC screen online and offline.

Jing screen capture tool doesn’t promise the best feature like you can see in Microsoft viewer or PhotoShope, however, for a simple and lightweight tool to capture Windows and Mac PC screen, you should consider the Jing.

The LightScreen tool is an automated tool for Windows users to take screenshots and save users the tedious process of saving and cataloging screenshots.

The best feature of the LightScreen screenshots tool is the ability to upload images directly to imgur.com for future and instantly image link sharing on other platforms such as social media, emails, and via SMS.

LightScreen capture software offers an easy approach for users to customize their captured screen, add some effect, hide sensitive information, add indications, blur and erase some parts, and above all, give a specific name to your screenshots before uploading it.

MonoSnap tool offers both screenshots and cloud service where users can upload their screenshot for future use. The list of the tools to take screenshots above are viable but the features of the MonoSnap to capture Windows and Mac OS X screen, customize it and upload it to their cloud server for future access is yet another features to consider when choosing the best tools for capturing Windows and Mac OS screen.

It’s very easy to capture full screen with the MonoSnap tool on Windows and Mac OS X with a tool to edit text, cover or erase information that is sensitive such as password, card numbers, PIN, and lot more.

The MonoSnap offers a whole lot of customization which includes arrows pointing to a particular direction in the captured image and even support PC screen record.

If you are into video editing and you are not buoyant enough to buy a paid tool for editing your video, the screenshot tool, MonoSnap could be of help as the best and free tool to start with as a video editor as well as a screen capture tool.

Microsoft Windows has a lot of free and open sources tools for maximum utility, the ShareX is one of the free tools for Windows users. With the ShareX tool, you can take a screenshot on Microsoft Windows, edit it, add some spices, clear where you don’t want to show to the public, copy the screenshot to a clipboard and save to hard disc is all you enjoy using the ShareX screenshots tool.

ShareX is a portable tool to capture a full PC screen and share with your friends online, copy and paste from one program to another without interfering with the graphics of the captured area.

The ShareX developers have celebrated 12 years of good working and serving the public with a free tool.

CamStudio is a very popular tool out there to record Windows and Mac OX screen as well as taking the screenshots of select area. The CamStudio is a bit complex compared to other tools to take screenshot shared above.

As at the time of writing this article, I must let you know that I am still learning how to edit videos properly using the CamStudio tool like a professional. However, editing and filtering screenshots is a no big deal for me now.

You cannot underestimate the power of thinking. The PicPick is a popular tool in the area of its default customization. Fine, it’s a tool to take a screenshot on Microsoft Window, however, once the tool’s installation is completed, the tool will be added to the taskbar with all function accessible via the context menu.

PicPick is one of the best tools that offers the quickest access to tool menu and provide all its needed at the point of need. The PicPick is a light-weight tool to capture Windows screenshots, filter it, add color, remove and add information, blur sensitive part, and copy clipboard.

Snipping tool is a simple screenshot tool included in all Microsoft OS starting from Windows Vista, Windows XP, and new Windows such as Windows 7, Windows 8, Windows 10, and Windows 10.1.

If you do not take note of the snipping tool on your Windows, it’s the scissors like a tool in the taskbar. It works similarly to Lightshot it terms of taking screenshots.

However, the snipping tool doesn’t have many features compared to a standalone capturing tools shared before like editing, highlighting, erasing sensitive information, and cropping out a specific section without a mistake.

Gyazo is another open source tool to take screenshots for Windows, Mac OS X, and Linux, edit the screenshots, add some spices, clear sensitive sections, cut out where you don’t want to share, upload the screenshots to the web and share the screenshot URL across the web for others to access.

The Gyazo has support for all browsers using an extension and as well supports Chromebook using the Gyazo Chrome plugin.

Gyazo further strength the ability to take screenshots on all devices by providing a smartphone app to capture phone screen.

For Android users, just head to the Google play store to download Gyazon Android screenshot app and for iOS users, you can also download the iPhone, iPad, and iPod version of Gyazo screenshot tool.

Fraps is a 2In1 tool for Windows OS. It is used for capturing and recording Microsoft Windows OS screen and add some touches to it using the tool.

The Fraps also has its own limitation. Yes, it’s a free tool but there is a limitation for the free version. The free version offers 30 minutes screen recording with unlimited screen captures.

Additionally, to use the free fraps tool for screen recording with the free version, the tool will auto-add watermarks to the top of the video but can be removed when you upgrade to a paid version and the video record length will go as far as unlimited.

FastStone Capture is a portable and light-weight tool to capture and record a PC screen and add effect to the captured or recorded video. It’s different from Camtasia Studio which is mainly for capturing screen video.

Although it offers both paid and free service depending on the purpose of using the tool. If for capturing alone, the free version will go a long way to be of usefulness.

However, for recording unlimited video screen on your PC, the paid version is recommended else there will be a watermark and limitation to the length of the video you can record.

If you want to enjoy Bandicam you need a paid access else you won’t stay long with the tool. Despite being an advanced computer screen record and screen-capturing tool, an amateur can make use of the tool and get the best out of it in no time.

As it were, the Bandicam has three modes to choose from. The first is screen recording which is capable of recording any area on a PC screen. The second mode is the ‘Game Recording’ mode, which can record the target created in DirectX or OpenGL. This feature is suitable for game lovers to want to share game stunts with friends or upload it online.

And finally, the ‘Device Recording’ mode which records Webcams and HDMI devices.

The free ScreenPresso version will push you to upgrade to a paid version with a lot of utility features. At present, I have the ScreenPresso pro for capturing and recording my PC screen and it really worth the price.

All you need is a few time to learn the rudiment to edit captured videos using the tool. The screen pressor tool has a lot of tools to add and remove information from your screenshots which include the blur feature, arrow key, and lot more.

These screenshot tools mostly work with Windows and Mac OS X, however, some of them also work with Linux but not all. The one with Linux access will indicate fully that it can be used with a Linux computer and provide a download link and how to install it.

PrintKey 2000 is a lightweight tool kit to take screenshots on Windows available for 64-bits and 43-bits. The PrintKey 2018 version offers more features compared to 2000 that even overrides the PrtScr feature on Windows 7/8/8.1/10/10.1 to capture Windows computer desktop and or a selected part of the screen.

The PrintKey Pro has more features compared to the free version. However, the paid PrintKey offers premium features similar to PhotoShop tool kit.