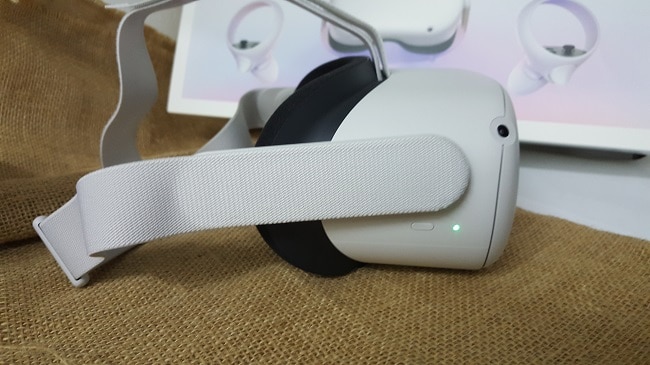 Since your Oculus Quest 2 virtual reality headsets allow you to play games wirelessly and explore the World of Myst among other uses, the power gets drained and requires you to charge it occasionally to enjoy the virtual reality experience continually. Do you want to know how long does Oculus Quest 2 take to charge? Then here it is! Read on!

The Oculus Quest 2 headset allows free usage but is powered via batteries. The controllers use an AA battery system, which needs to be replaced once they are weak. However, the headset itself has a built-in rechargeable battery because it needs more overall power.

To know when your headset needs charging, check out the indicator light located on the right side of the device, though you can only get to see this information once you plug it in for charging. If the light is red, it implies the battery is low (i.e. under 10% remaining). However, if it’s orange light, then it’s charging and has more than 10% of its capacity. Finally, a green light simply means that the headset is fully charged. 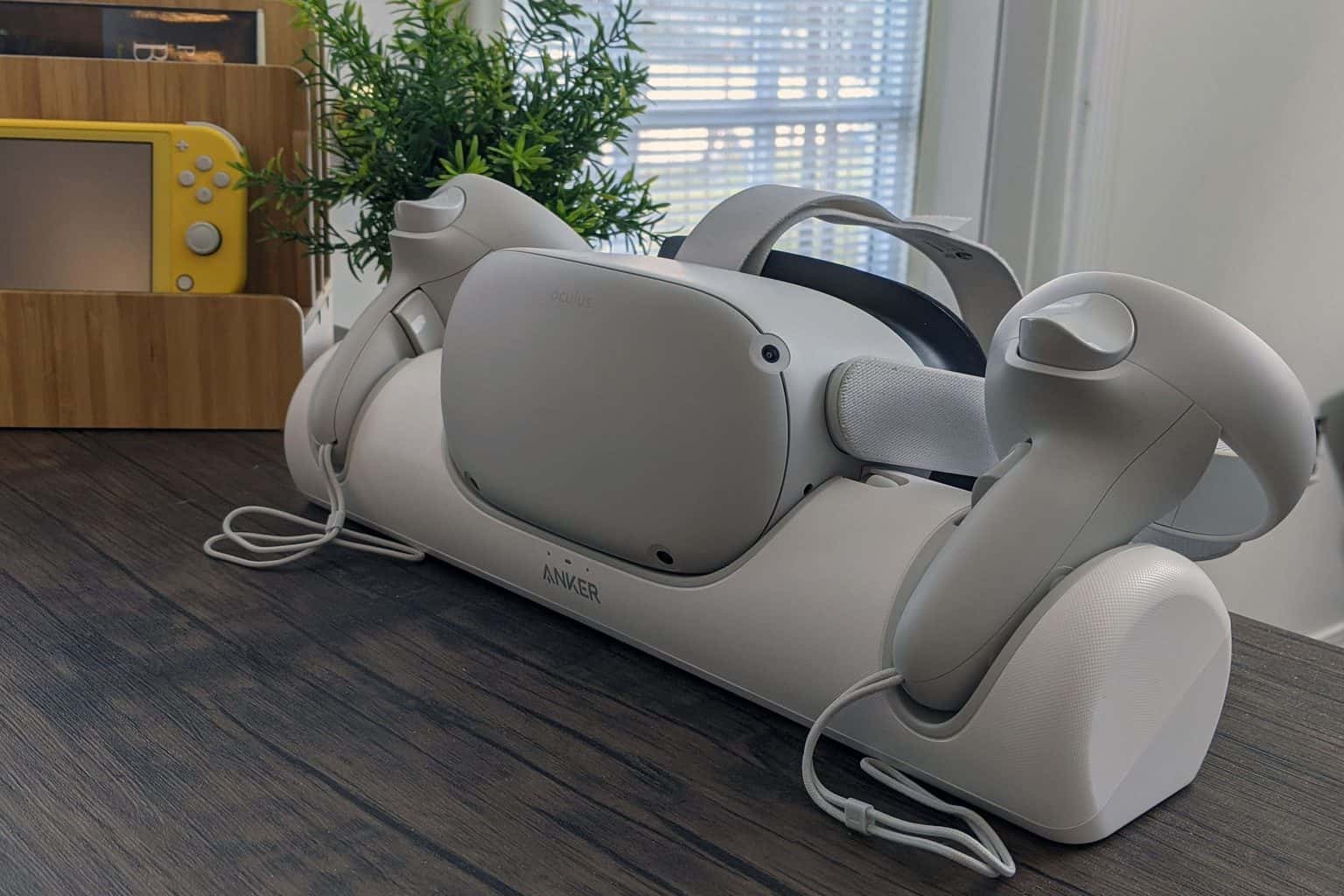 How to Charge Oculus Quest 2

The Oculus Quest 2 headset is very easy to charge fully. All you need to do is simply use the USB-C cable or adapter that comes in the box and connect it to the free outlet on the left-hand side of the headset. That’s it! Very simple, right?

This is all you need to know about how to charge Oculus Quest 2 fully and be ready for your next VR adventure.

In case you don’t like using multiple cables though, you can as well charge the headset using a charging dock. There’s a functionary one from Anker that works to charge the headset via a magnetic USB-C connector, which becomes functional once you have plugged the dock into the wall.

How to Change Quest 2 Controller Batteries

To replace the Oculus Quest 2 controller battery, grab it and follow the steps below to learn how to install it:

That’s it! Now, you have successfully been able to change Quest 2 VR headset’s Controller batteries. Once you are done, they will become alive again without any added steps. Therefore, next time your controllers are running low on power, simply follow the steps above to change the batteries again easily. You will also know how long does Oculus Quest 2 take to charge. How to tell if Oculus Quest 2 is charging

You don’t just connect the USB C-Cable and assume your Oculus Quest 2 is charging, you need to know and be sure it is charging. In case the light is off while the cable is connected, then it means the headset is not charging.

The charging light changes from red to green once it has been fully charged. However, once the indicator is green, you can unplug the Oculus headset.

Note:- The company recommends users switch off the headset instead of putting it in sleep mode when it is not in use. Know how long does Oculus Quest 2 take to charge.

Were you able to charge your Oculus Quest 2 for a full two and half hours to get the maximum battery life to get three hours of constant playtime, till the battery gets low again? Then you can as well increase its longevity. This can be done via different software modifications.

You can as well extend the Quest 2’s battery life by buying an extra battery pack that charges the internal battery while playing. This can either be the official Oculus Quest 2 Elite Strap with Battery or a third-party variant like the leChivée Battery Pack for Oculus Quest 2. These provide you with an additional full charge, doubling the longevity of what to expect.

Here is how to maximize Oculus Quest 2 battery life:

How long does Oculus Quest 2 take to Charge?

The batteries of both the Oculus Quest and Oculus Quest 2 have about the same capacity, around 3,640 mAh. If you use the included cables in the box, then they should take about the exact amount of time to charge; according to the manufacturer, which is between 2 and 2.5 hours from empty to full.

If you are using the Elite Strap with a battery with your Quest 2, which allows you to use it longer before connecting it in, the additional storage will add some time to that figure. However, since your Quest 2 will use up the external battery before tapping from the internal one, you could power the extra one up alone partway via your session and still get the complete time from your built-in power source.

It’s also possible to use the Oculus Quest or Quest 2 while they are charging, but you may not have the same freedom of movement while they are plugged in.

To also check the status of the battery while charging users, you can navigate to Oculus Home via VR or go to the Oculus App settings.

Once your Oculus Quest 2 is fully charged, you should expect it to last between 2 to 3 hours on battery life. It lasts for about 2 hours for games, and 3 hours if you are watching movies or other media. That’s it! Now, you know how long does Oculus Quest 2 take to charge. 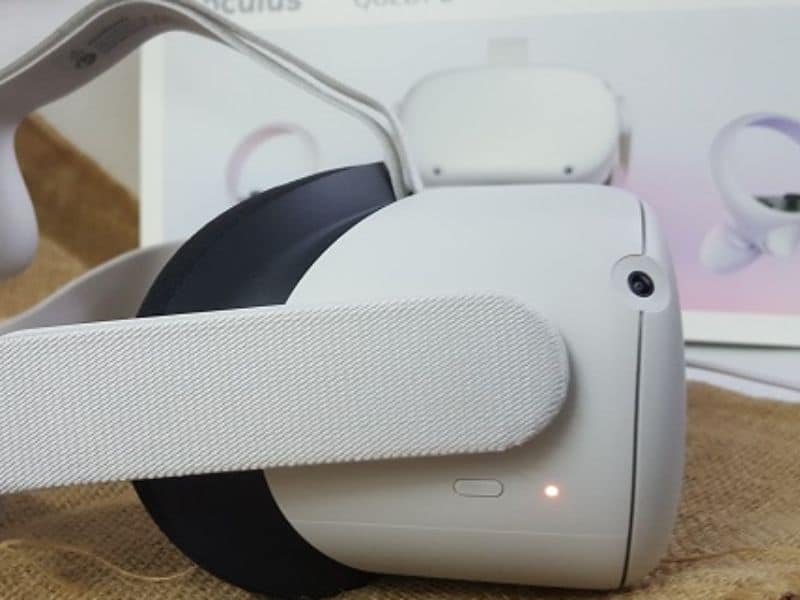 How long to charge Oculus Quest 2 Elite Strap with battery

The Quest 2 Elite Battery Strap features have a similar fundamental design to the Elite Strap. The following are its unique features:

However, there are a few key differences that make the Elite Battery Strap much better than even the Elite Strap.

To extend the battery life of your Oculus Quest 2, you can get the Quest 2 Elite Strap with a battery. This accessory boosts the fit and comfort of your Quest 2 with firm straps, a rear hammock for weight distribution and extends the playtime of Quest 2.

Note that this add-on comes with an extra battery built-in. It can potentially double the amount of playing time available between charges to know how long does Oculus Quest 2 take to charge.

You can as well monitor battery life, either with an integrated measure, or individual measures for the Elite strap battery and the internal headset battery. The Quest 2 will use the battery in the Elite Strap first before using the internal battery.

If you choose the headset power icon in VR, it will show you a more detailed view of the battery status with a separate charge level for the internal headset battery and Elite Strap battery.

To also monitor the color of the LED on your Quest 2, you can also see battery levels in VR, follow the steps below:

Is Oculus Quest 2 not Charging? Try these Fixes!

In case your Oculus Quest 2 is not charging or it’s taking forever to be fully charged, it could be due to any one of the following reasons below:

You can try the following troubleshooting tips below in case your Oculus Quest 2 headset is not charging at all or it’s charging slow.

Since you know that the headset LED on the side turns orange while charging and then turns green when it is fully charged. Therefore, begin troubleshooting by checking the USB-C cable. The cord might be damaged or there may be something wrong with the AC wall adapter.

Try twisting or shaking the cable or connect the charging cable to another USB power adapter or computer to check if charging begins. In case this doesn’t work, try using another USB-C cable or use your charging dock to identify the cause of the problem.

In case your Oculus Quest 2 has a broken charging port. If you can’t do anything about it except contact Oculus or get a replacement headset. Then, do it to know how long does Oculus Quest 2 take to charge. 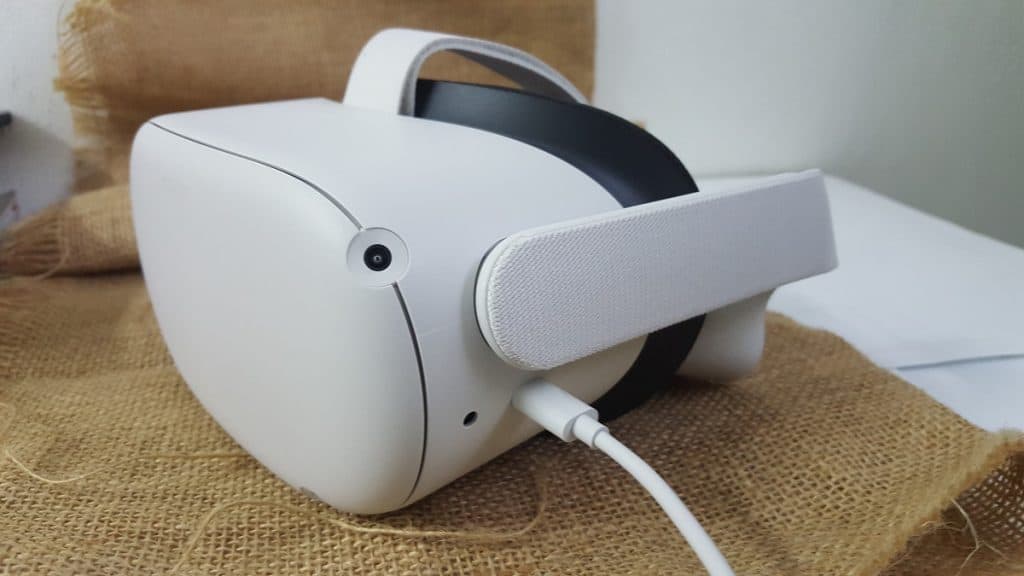 Ensure to use the Original Charger

It is always recommended by the Company to use the original charger for your headset. Although, it’s possible to charge it via a USB-C charging dock yet the one provided by the company is the best.

Since it is specially designed for the Quest 2 headset and it eliminates charging issues. Using an authentic charger is the immediate fix to solve the issue. Even if you are using a genuine charger, ensure it is in good condition.

The original charger should be connected firmly to the adapter. In other words, ensure the cable is intact without any signs of damage. Once the charger is working optimally, you will know how long does Oculus Quest 2 take to charge.

You can change the Power Source

At times, the solution to your Oculus Quest 2 not charging issue can be as easy as simply changing the power outlet.

You may not notice in time that the power source is not working or cannot deliver enough voltage. Therefore, connect the charger of your Quest 2 to another power outlet.

Then try connecting various electronic equipment to the same power outlet to check its performance. In case you are charging via a computer, ensure it is turned ON and not in sleep mode.

Also, connect to all the different ports on your computer, maybe one of them is not working. Or you can simply charge your headset via a charging bank.

By switching between different power sources, you can detect where the real problem is.

Allow the battery to cool itself

Another reason why your Oculus Quest 2 headset won’t charge is because of an overheated battery. This could occur after long periods of gameplay. However, note that the headset may or may not feel hot to touch.

If you have an overheated battery, then you will need to turn off the headset by long-pressing on the Power button for about 10 seconds till it shuts down. Then, allow the Oculus headset to cool down for about 30 to 45 minutes. Finally, connect the charging cable back into the headset and see if it shows any charging indication. Well, it should! In case an overheated battery is not the cause of the Oculus Quest 2 charging issue, your headset might simply need a good restart. To do this, follow the steps below:

I hope you know how long does Oculus Quest 2 take to charge after reading through this post? Kindly drop in your reviews in the comment section below. Thanks for reading thus far.