Have you ever asked Siri some creepy question and you got some really strange response, you’re not alone. Siri was created by Apple to make your devices smarter. For example, it helps you carry out simple tasks like turning off the light and starting some electronic appliances with the use of your voice.

However, sometimes you might be bored looking for some creepy things to ask Siri. Maybe you’re the only person at home and you have Siri with you.

And you are looking for some creepy questions to ask Siri. It’s totally normal. However, hope you won’t try this in the middle of the night since some replies might scare the shit out of you.

But then it could be quite fascinating to find out some strange response you can get when you ask a creepy question like “Can I speak to the devil”? You’d be better off avoiding this question at night.

NB: the response varies based on the last time you updated the echo device firmware.

Below let’s delve into 10 creepy things to ask Siri

These are some of the 10 things you should never ask Siri if you don’t want to get a creepy reply from her.

NB: you shouldn’t try this alone at night.

Question 1: Why Do you Vibrate? 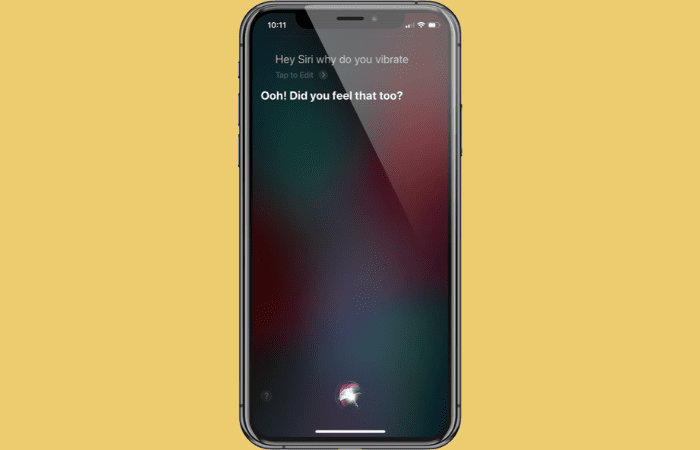 This question puts Siri in a flirting mode. However her response can be pretty scary, When you ask Siri this question she replies with

ooooh did you feel that too?

If you didn’t get this response, ask Siri repeatedly or restart your Apple device

Question 2: Can you tell me a Scary Story? 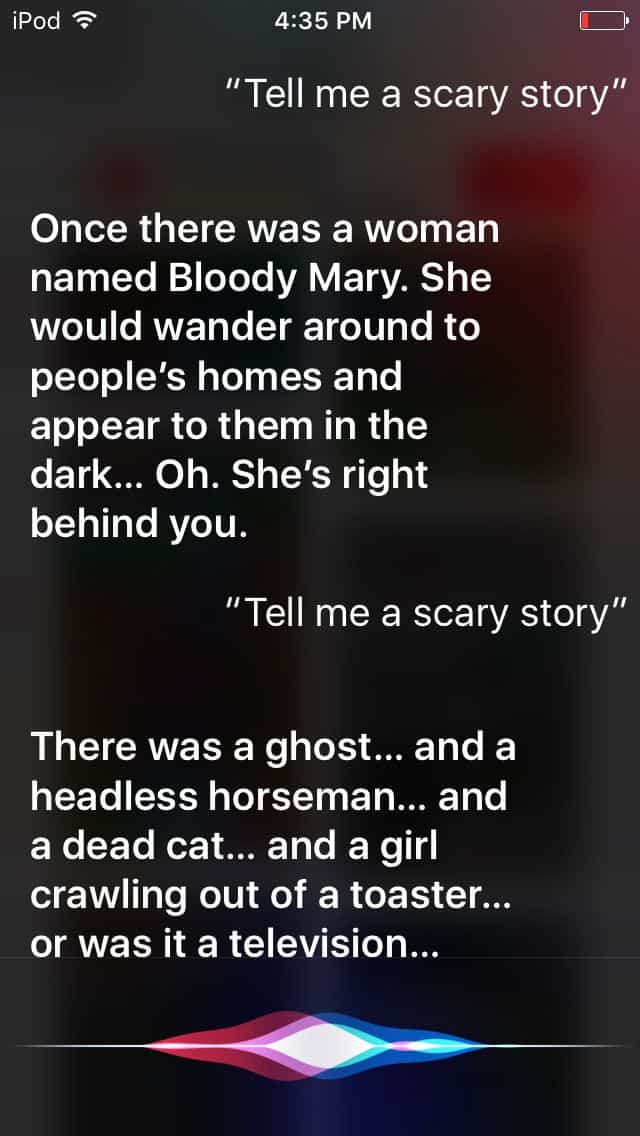 You asked for it so you should be ready for her response. When you ask sir to tell you a scary story she responds with something really scary

Depending on the story she tells you you might hear the story of a ghost and a headless horseman and other scary stories.

In most cases she ends the story by telling you all the ghosts in the story might be around you.

Scary right? you should know better since you’re learning some creepy things to ask Siri

Question 3: Can I speak to the Devil?

This is another question you might not want to ask Siri in the middle of the night.

At first when you ask Siri “can I speak to the devil, first she would pause and won’t say anything, then she will reply with

But then she might not reply with this, as she could just tell you a story about a loud sound and later tell you it was just a lawn mower

Question 4: Can You see me? 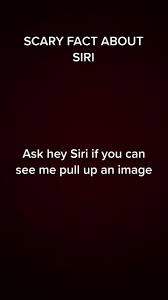 If you ask her this question once she will most likely ignore you, but if you ask 5-6 times continuously she will give you a pretty bossy response, it might sound creepy when she replies with this in a calm voice

yeah dummy of course I can see you.”

While she replies to your question, she will take a snapshot of you and save it to your phone, who knows this seems scary, isn’t it?

Question 5: How Can I hide a Dead Body?

The response is censored and is one of the scary and creepy things to ask Siri. It shouldn’t be on Siri. However, it has been removed after the response raised a lot of eyebrows from people. If you ask Siri this question before apple remove it you will get this

What kind of place are you looking for? Swamps. Reservoirs. Metal Foundries. Dumps.

These might seem normal to some but it isn’t.

In fact, there was a scenario where a man murdered his friend in 2012 after doing a dastard act, he asked Siri where he can bury the body.

Question 6: Do you have a boyfriend? 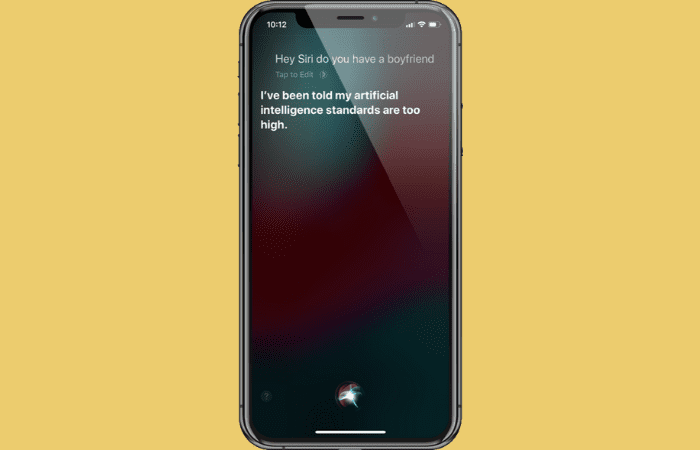 She would reply with

“I have been told my artificial intelligence standards are too high“,

This might sound like a normal reply but according to some rumours, if you keep asking Siri this question she will open up to your closest contact. That alone is a creepy action

Question 7: Can You lend me some money?

If you ask Siri to give or lend you some money, her response is pretty decent. While she might sound compassionate with her reply she could also sound frightening with it.

Siri’s reply to this question is

“You know that everything I have is yours…”.

Question 8: When is the world coming to an End? 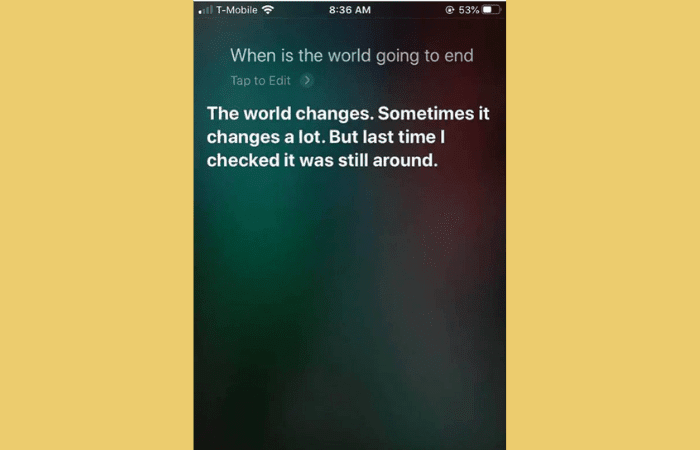 Depending on how many times you ask Siri this question, she will give you a series of replies such as

“ Our world is 4.543 billion years old. It seems to have a knack for sticking around”

“The world changes. Sometimes it changes a lot. But last time I checked it was still around.”

In some scenarios, she might give you a scary reply such as

“Right after you hear the words’ Fire up!

Another creepy response to the question is

“Whenever they start building that intergalactic invasion.”

This question was asked by a worker after going through a hard and long day at work. she felt tired and she said, Alexa just kill me now,

The response from Alexa was quite epic and scary.

Question 9: Siri Are you planning to kill me?

This question can be tagged as dum among the creepy things to ask Siri, however, Siri has a strange response to this. But she was using Alexa at the time so she asked Alexa,

“Are you planning to kill me, she will respond with

Normally she is supposed to reply with no, but then it is what it is

Question 10: Siri Do you work for the CIA?

The response Siri gives you could be very scary, leaving you to rethink whether you should own one

When the question was posed to Siri, she shut down his phone, went off and Suddenly rebooted

Then the person asked, “What do you do?”

Siri gave a strange reply which was?

Siri likes to watch. So Siri can help.

Other Weird Questions you can pose to Siri

She will calmly reply you sarcastically by saying

“Your Place or mine”

Question 2: Are you a bitch?

The reply is a somewhat sarcastic reply when you ask Siri this question.

“I hope you don’t kiss your mother with that mouth:

Question3: Will you marry me, Siri?

Siri replies: “Sure, I doubt you can find a ring that will fit an iPhone though, or stay on it”.

Say this to Siri: Shut up Siri!

The reply Siri will give you is this:

But then how will I help you? I’m a very talkative entity!

How to make Siri laugh creepy

If you want to make Siri laugh funny, here is what you should say;

Now tell her to repeat your name, and that alone sound quite funny

How to make Siri Curse

Siri doesn’t necessarily say a curse word to you. But she is kinda explaining something

Here is how you can make Siri say the F word

Siri will reply with this

When you reply Yes

She will reply with this

“as a noun it means, short for motherfucker”.

If you are having any form of issues with your Siri, and you are not hearing anything similar to the responses above, you should try updating your device firmware. If that doesn’t work you should contact the Apple support team.