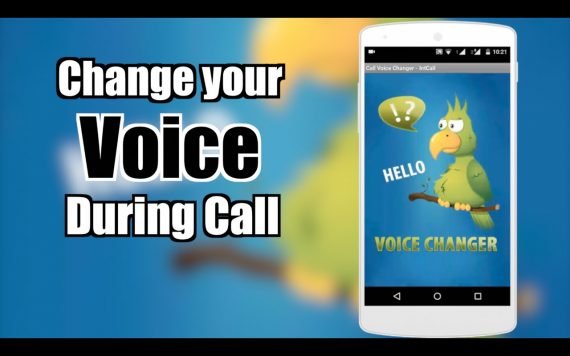 Those days, we’ll use a handkerchief to cover our phone mouthpiece to change our God’s given male voice to female voice playing pranks when we make calls. It was fun and of course, the memory is so sweet. The noodle kids will probably not know we used to do this because of the call voice changer app for both Android phones and iOS devices.

If you are not part of the generation that changes voice when making calls so that the person in the other end will not be able to identify who is calling, technology has really done a good thing for you and for the generation to come. The best call voice changer back then was a person with a feminine voice.

However, instead of being a feminine with a unique voice to change your voice while making calls, the problem is solved with call voice changer app. If you were like me, playing pranks as a hobby, these apps will find a slot on your phone to start playing pranks on all your friends.

This is probably the apps upcoming artists are using when they want to sing like their mentor in the industry. This app adds effects to recorded songs different from the singer’s voice. Also, it adds effect to your voice when you make a voice call to put the receiver in the other end in a dicey condition trying to guess who calls most especially if you hide your number or the call is on messenger.

If you have a few dollars you are ready to splash I will advise you get the voice changer plus app for your phone. With this app, you can play a decoy and mimic the receiver’s voice when making either a voice call or messenger calls.

This app has some uniqueness which is hidden in the premium version. However, if your goal is to have fun with the voice changer app the free version has what it takes to make your day a bright one.

We, as humans all have a unique voice whether it look alike or not but we are all unique in own ways. However, to create a different story in everything you do on your phone or messenger the best voice changer has some amazing feature to make this a reality.

This is one of the best pretence apps to pretence you are somewhere else or you are not even the one talking. With this app, you can pretence you are by the roadside with a lot of noises everywhere and you cannot even hear what the caller is saying.

With this voice changer Androbaby app, you can add funny effects to your voice calls or voice messages like echo, monster, helium and many more.

If you love going weird when calling this is the app you need to transit your normal voice to a weird voice with a single touch. The downside of the app is credit base yet the app claimed to be free to use. This implies that once you exhaust the voice call credit you will need to purchase credit to be able to make a voice or messenger call again.

Do you want to sound like a robot on phone with your loved ones? Then, Robovox voice changer app should be your choice. While the free version is limited with the number of robot voice you can mimic calling though and enjoy over 32 robots voice with the premium version.

The fun of the app is you will be seeing how your voice is transiting from the normal voice to a robot voice on the screen.

If you want to freak the hell outta your friends and family use the helium voice changer app and installing you will be sound suffocating on phone. Helium, as an asphyxiant element is toxic to the human body and it kills faster than when a person is drowning.

However, the helium app is best for this and you will start sound suffocating on phone. Meanwhile, you wouldn’t want to try using the helium voice changer app when calling someone like my mother because she’d have been dead before she realized you are faking it.

This app is one of those good apps whose best feature is in the premium version, very bad compelling users to subscribe to the premium version to use. The free version is not bad though yet the premium has the whole goodies and you may want to try using it for a moment.